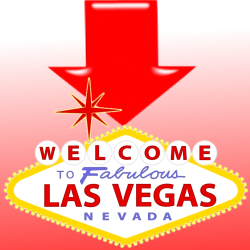 After posting modest gains over the summer, Nevada gaming revenues have declined for the second consecutive month. Figures released by the Nevada Gaming Control Board show September’s statewide casino take falling 5.8% to $863.9m. The shortfall was mirrored on the Las Vegas Strip, where casino gaming revenue fell 5.7% to $490m. Despite September’s decline, gaming revenues are up 1.9% statewide and 3.9% on the Strip for the first nine months of 2011.

Nevada’s increasing reliance on Asian high-rollers winging into town to drop millions at the baccarat tables is behind much of the revenue figure’s inconsistency. While Strip casinos reported revenue gains across almost all channels – craps up 19.9%; blackjack up 18.4%; roulette up 27.8% and slots up a modest 0.2% — the infinitely more volatile game of baccarat fell 36.2%. (Sportsbook gross win was also off 36.7%). Meanwhile, visitors to Las Vegas rose 5.5% in September to 3.3m – the 19th straight month of increased attendance. The hotel occupancy rate in Vegas hit 86%, helped by a 49% bump in convention attendees.

We have a theory as to why Vegas slot revenue posted only modest gains this month. Blame Candy Spelling, widow of legendary TV producer Aaron Spelling (Charlie’s Angels, Starsky and Hutch, Melrose Place and, ahem, Vega$). Candy inherited an estimated $600m or so when her husband died in 2006, and since she’s now 66 years old, she’s got to figure out ways to spend it all before she dies so that estranged daughter Tori won’t see a dime. (Or so we’ve heard.)

Anyway, Candy was recently in Vegas, playing high-limit slot machines ($100 to $1000 per spin) and somehow convinced one of them to pay out a $90k jackpot (which Candy probably left the bellboy as a tip). Maddeningly, this isn’t Candy’s first mega-payout. She’s previously cashed six-figure paydays in 2007 and 2008 playing Vegas slots. But was her most recent jackpot staged? After all, news of Candy’s good fortune hit the wire on the same day that the reboot of one of husband Aaron’s shows (90210) was airing an episode titled “Vegas, Maybe?”. We’re not really suggesting a cross-promotion/collusion/conspiracy theory here, we were just trying to find a way to work in this picture of über-fine 90210 star AnnaLynne McCord. You’re welcome.