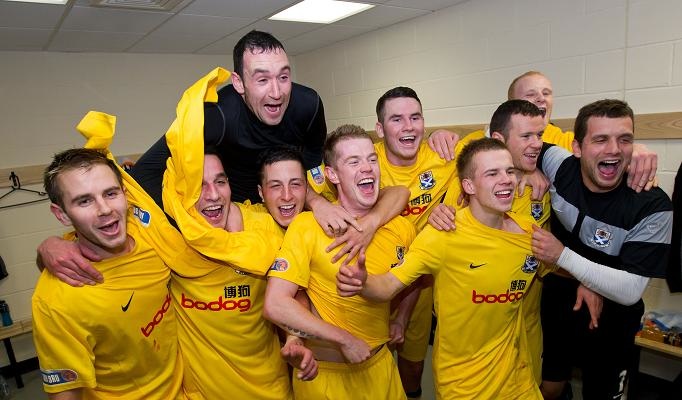 Against all the odds, Bodog brand sponsored Ayr United knocked St. Mirren out of the Scottish Cup to make the League Cup semi-final.

This is the first time in ten years that Ayr United has reached a semi-final and the victory represents The Honest Men’s third straight win over Scottish premier league opposition, two impressive feats for the modest Division One team.

Naturally, Ayr United players and fans were delighted with Tuesday’s outcome and are hoping to make even more history at the next big match whose location and date will be announced tomorrow.

Ayr United Chairman Lachlan Cameron told CalvinAyre.com, “I’m over the moon. Taking this path to the semi-final and disposing of three straight SPL teams makes it even more impressive and gratifying. We can’t wait for the draw to come out and all three potential opponents are good for different reasons and frankly I would be happy with any of them”.

We caught up with Ayr United’s star striker Michael Moffat to find out how he feels about the victory: “The draw for semi finals is tomorrow so hopefully we’ll get Kilmarnock, a big derby match and the fans and players would all love it! We need to get our act together in the league for now”.

When asked how the Ragazzi plan to celebrate their St. Mirren victory, The Moff quickly responded with, “I’m sure the boys will arrange a team night out very soon- we’ll celebrate in style by getting so drunk that we can’t even walk!”

Now that’s going to be one special Scottish celebration- we would expect nothing less from a team sponsored by the mighty Calvin Ayre. Calvin himself commented on the win with a proud, “This is proof that prayers really do get answered and I’m looking forward hearing Somerset Boab’s celebratory anthem!”

To find out exactly what Somerset Boab has in mind for his fans we caught up with the legend himself: “I plan to team up with Bodog and sing LIVE at the National Stadium at the Semi final to warm up the Ayr Utd fans and will shortly be posting a song on my facebook page and youtube dedicated to Chris Smith who scored the goal that got us through, as requested by Ayr Utd fan Calvin Ayre – Your wish is my command sir Calvin!”