Home / Poker / For Poker in the Mainstream Media, It Always Feels Like The First Time Earlier this week, the New York Times ran an article under the headline “Poker Inc. To Uncle Sam: Shut Up And Deal”. On the surface it’s an exploration of Full Tilt Poker, Black Friday and the prospect of online poker becoming explicitly legalized and regulated within the United States, and that’s probably exactly how it reads to the average Times reader who doesn’t know much more about poker and the online poker industry. But if you have even an inkling about online poker, it’s not hard to see what’s wrong with the story. To borrow Mark Twain’s logic from the quote above: suppose you didn’t know anything about poker, and suppose you were a mainstream news reporter.

The article begins with breathless descriptions of Full Tilt honchos Chris Ferguson and Howard Lederer as “grand masters” whose styles were “endlessly parsed” by the poker press. That might have been true in the early days, especially of the former world champion Ferguson, but since the earliest days of the boom an entire new generation of poker players has come up with impressive accomplishments of its own. These days the poker media is a lot more likely to be interested in players like Jason Mercier or Ben Lamb than in dinosaurs like Lederer, unless some government official is casually including “The Professor” in press releases mentioning money laundering or Ponzi schemes. But then again, as the Times takes pains to point out, poker is a “cultish” community – we’re probably just elevating our false idols because we don’t know any better.

From there the article tosses out a bevy of statistics – how many people play poker online, the amounts gambled on it, the odds of hitting different hands – that read like somebody just finished poring over an encyclopaedia entry about the industry. In this way it’s much like every other feature on poker in a mainstream outlet – it talks about poker like it’s doing so for the first time. This is probably a solid approach, since audiences have never really learned anything about the game or the issues surrounding it from the dozens of nearly identical stories published since the first TV ad for online poker hit the American airwaves.

When it finally comes time to talk about the skill-versus-luck debate, the Times reporter, like Pavlov’s dog salivating at the sound of a ringing bell, reflexively turns to nanny group Focus On The Family for a quote that demonstrates everything that’s wrong with mainstream articles about poker (emphasis mine):

Chad Hills, who analyzes the gambling industry for Focus on the Family, says the skill-versus-chance argument is nonsense. True, players can improve their game with practice and so on — but the cards ultimately determine who wins and who loses.

Not even the best players “can tell you what the next card flipped over is going to be,” Mr. Hills says. “If you regulate it, you’re cracking the door open for one of the largest expansions of gambling ever in the history of the United States.”

The worst part about this blatant misrepresentation of the fundamental nature of the game is that it’s done so casually. To say that “the cards 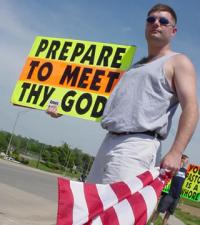 ultimately determine who wins and who loses” in a game of poker makes as much sense as saying that an object’s weight is what ultimately determines whether it can fly. A 300-ton Boeing 747 can certainly fly thanks to the laws of aerodynamics and a hand of poker can certainly end without the cards determining its outcome thanks to every player’s ability to fold his hand; anyone familiar with even the most basic rules of poker knows that you can fold your hand at any time. It’s like telling me the world is flat and then asking what I want to eat for lunch.

Reporters turn to sources like Focus on the Family in order to maintain a sense of balance, but it’s a false balance. Instead of balance, this simply lets the loudest political voices turn a nuanced subject like the possible legalization of poker into a story with just two sides – unfortunate for the audience, but highly convenient for the reader. Depending on a Christian-right hack as a source on the relevance of skill versus luck in poker is on par with asking a Muslim imam to comment on scientific observations linking sunspots to weather patterns on Earth. No reporter worth two bits would ever consider doing that, but here the Times is once again blindly regurgitating a quote from the Fun Police. It’s foolish at best and downright deceptive at worst.

Oddly enough, the Fun Police spokesman actually hits on the story’s buried lede when he talks about “one of the largest expansions of gambling ever in the history of the United States.” If the Times is going to quote PartyGaming’s CEO Jim Ryan about the “inevitability” of Congress regulating the game with any kind of seriousness at all, it ought to be talking about the details on the current push to legalize the game. Instead of getting insightful questions and answers, though, we get the same voices represented time and time again in service of the same old false sense of balance.

A two-page feature has plenty of space to address all the most important questions about the explicit legalization of poker in the United States: Who will be the winners and losers if any legislation legalizing poker passes, and who is lobbying Congress on behalf of them? Who opposes legalization on grounds other than what the Invisible Man In The Sky says? What would a future American online poker landscape look like, and what would the end result be for the players and the US government? If you depend on the Times, you’ll never know the answers to those questions. But you’ll always be reminded of how little a mainstream news reporter actually knows about the great American game.