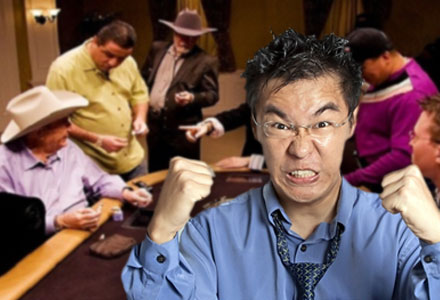 Lately I’ve been kicking around the idea of playing a tournament on the WSOP Circuit. “It’s been too long,” I’ve been telling myself. I think to myself, “Hey, I’d get the chance to get out from behind my computer. I could see some old friends who play the tour. And of course there’s always the big prize money waiting at the end. Somebody’s got to win it, and it might as well be me.” It all sounds fantastic, until I remember my least favourite thing about playing live poker: That Guy.

Like some sort of ancient god, That Guy takes many forms. He might act out of turn on a regular basis, or ask for a deck change twice an hour. He might try to make a raise that isn’t big enough and argue about it with the dealer, who’s the only one of the two of them actually keeping track of the game. The concept of personal hygiene may never have become an important one in his life. He may be unable to avoid getting up from his seat every time he’s not in a hand, making you wonder whether his doctor (or amateur pharmacist, as the case may be) has considered telling him to lower his dosage.

That Guy has been known to pore over the structure sheet, complaining about how the green $25 chips are being colored up too soon or how there’s not enough play at the end of the event because the tournament director left out the crucial 1,750/3,500 blind level. He almost always talks too much – way too much – and has little, if any, regard for the concept of a “normal conversation volume.” More often than not, he has a comment ready for everything that could possibly at the table. “Hey buddy, you’ve folded three orbits in a row, when are you going to play a hand?”, “I knew that river card was going to give him a flush.” “Boy, you look funny when you try to shuffle those chips – what are you, one of them internet players?” or “Oh man, I almost called before the flop and I would’ve had two pair, can you believe that?” If you’re really unlucky, he may be an incurable drunk on top of all of his other negative aspects.

Whatever form he takes, That Guy always has the same effect on the game: he disrupts the rhythm of what is already inherently a slow game and makes it a much less enjoyable experience playing poker online. After all, you can mute somebody’s chat when you’re playing online but try to mute That Guy at a live poker table and you might end up in the local jail. In addition, if you get beer spilled on you while you’re playing online, you often have nobody but yourself to blame.

So it’s pretty terrible stuff, having That Guy at your table. However, it doesn’t have to be a purely negative thing. Sun Tzu wrote in The Art of War that you should keep your friends close and your enemies closer. You don’t have to really keep That Guy too close, especially if he’s hygienically challenged, but if you listen to what he says and watch how he acts, you can pick up a lot of potentially useful information. If That Guy is on a lucky streak, and you’ve been paying attention, your fortunes can change in the blink of an eye. It’s one thing to know that he’s a bad player. It’s another thing entirely to know exactly what kind of bad player he is because you took the time to listen to him, study his behaviour, and realize exactly what kind of situation is going to lead to you taking his stack. Being prepared to pounce when the opportunity presents itself means making the most of having to be around him for hours at a time.

Of course, depending on how you like to approach the game, That Guy can also serve as a template for how you can annoy the shit out of your table and use said annoyance to your advantage. (You probably also bet the dark side at the craps tables, but let’s ignore your less savory personality traits and focus on the topic at hand.) Some tables will be immune to the act, but many will instantly crumble into a pile of poker sadness the third time you try to make an illegal raise and argue with the dealer about what blind level you’re playing. You’ll quickly become the target of every decent player at the table, and knowing that can be worked to your advantage.

If you choose to take on the role of That Guy, just be aware that you’re going to make a lot of enemies. It’s not the point of the game to make friends, but it is a nice side benefit – one you’ll be missing out on if you choose to be the table’s resident annoying guy and somebody at your table, someone who doesn’t mind spending a little time in lockup, might just decide to mute your chat.