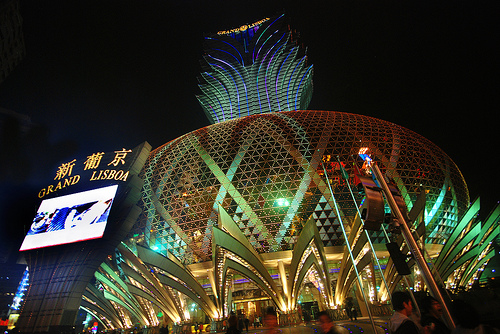 Stocks in the world’s most lucrative casino business market rebounded today as signs of recovery were there for all to see. Macau’s casino gaming industry suffered big losses earlier this week when a number of firms saw shares plunge by as much as 25%. This was off the back of uncertainties over the Far East and world economy with analysts worried that fewer visitors would have the money to visit.

Three days and a monthly gaming revenue report later, everything’s looking rosy again. Sands China were the largest beneficiary as shares closed 25.7% up at $18.98 closely followed by Wynn Macau (20.49% increase to $20.05) and MGM China (20.09% increase to $10.28). The enclave’s other firms fared just as well with Galaxy Entertainment posting shares that were 18.15% higher than the day before with Melco International Development (15.40%) and SJM Holdings (16.04%) seeing shares increase. Explains why all those guys operating in Macau were pretty bloody bullish about their chances earlier on this week.

One of the enclave’s biggest junket operators has announced a huge leap in chip turnover compared with the previous year. Asia Entertainment and Resources Ltd. (AERL) saw the figures leap by 189% as the firm posted a figure of US$1.92billion.

“While we are aware of recent concerns that have been raised about the Macau VIP business, we can firmly say we have not seen any decrease in demand or growth in terms of the VIP market,” said AERL chairman Lam Man Pou.

The increase in AERL’s chip turnover is likely to have had an effect on the earlier mentioned share prices. This is down to much of the casino business customer base operating through junkets and the VIP demographic is the one that many casinos target as the most lucrative.