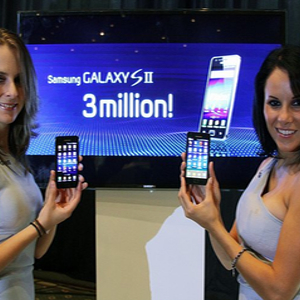 Samsung’s contender to Apple’s place on the smart phone kingdom’s lavish throne has made it to 10 million channel sales in impressive time. The Galaxy S II has fought through various legal battles with the Cupertino-based firm to plonk itself firmly at the top of the smart phone pile whilst saying “is that the best you got, Apple?!” It reached five million only eight weeks ago and will please Google as it continues to dominate the market with its Android OS.

The phone was only launched in the US a matter of weeks ago and has seen its presence in the market threatened by Apple legal cases in recent times. This led to a ban on sales in Germany and attempts to bar it from the remainder of the European Union (EU). Now we can understand why Apple is getting so antsy.

US buyers of the device that live in New York City will soon be able to use their device on the subway. A new scheme is being rolled out at six stations from tomorrow that will means AT&T and T-Mobile customers will benefit from cell phone service.

That means that alongside the obvious business advantages from being able to use a phone whilst underground, “data” should mean that limited internet access will be available. If the US should ever decide that gambling by mobile device is allowed underground then imagine how much more fun the subway would be!

The likelihood of that is probably about as much as it is getting signal on any other parts of the underground system not yet granted internet access.