Home / Sports / Women’s tennis gets ugly at US Open 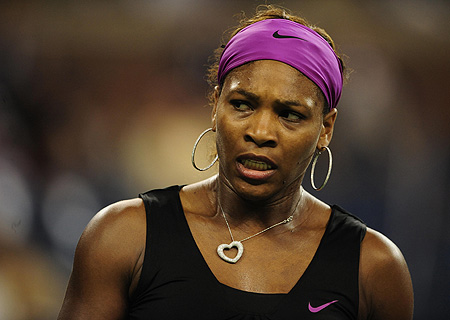 You won’t hear me say this very often, but Women’s tennis got real ugly this weekend at the 2011 US Open. It all started before the semi-final match between Serena Williams and Caroline Wozniacki.

Cyndi Lauper came out of the shadows in her peroxide hair to sing the American National anthem. There was probably tears in the stands, but it wasn’t because people were remembering the tenth anniversary of September 11th.

Instead, Lauper managed to completely butcher the National Anthem, and at one point resorting to mumbling the words she didn’t know.

“O’er the ramparts we watched, as our flag was still streaming.”?

Cyndi, FYI, it’s “O’er the ramparts we watched, were so gallantly streaming.” Not sure everyone appreciated the remix.

The match between the 28th ranked Williams and the number 1 seed Wozniacki was also ugly. In a blink of an eye Williams completely dismantled Wozniacki in straight sets, but don’t call it an upset. Williams was everything but a 28 seed.

If you want to talk about upset, we’ll have to move to the first set of the final at the US Open between Serena Williams and Australian Samantha Stoser. After a controversial, but correct call made against Williams by the chair umpire, Williams exploded into an angry tirade in which she called the chair umpire a hater and a loser and warned her not to look in her direction. Williams was later fined $2000 for the outburst.

Even more surprising, Stoser would end up upsetting Williams in an error filled match to win her first major.

It was supposed to be a sombre moment when Lauper took the mic, there had just been a moment of silence, and then she started singing and, well, listen for yourself…

As bad as that was, and it wasn’t horrific, few renditions beat this one which will forever life in infamy.


Why stop there? What about Carl Lewis? He can run, but the man can’t sing.