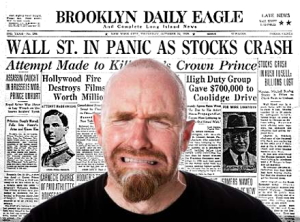 Stock markets around the globe tanked on Thursday, with the FTSE 100 off nearly 3.5%, the biggest single day loss since March 2009. The carnage was even greater across the pond; the Dow Jones had its worst day since December 2008, the S&P 500 fell 4.8% and the Nasdaq was down over 5%. A New York trader estimated there were 100 ‘sell’ orders for every brave/foolhardy buyer. Friday is expected to produce further sell-offs, and much could hinge on the release of July’s US employment figures.

So how low will this double-dip go? Is there a bottom, or do we need to start buying guns, ammo and that freeze-dried food Glenn Beck’s always pimping? Helpfully, the Internal Revenue Service released figures this week that offer a glimpse of what the future may hold for the gambling industry (assuming the situation worsens). In 2009, in the teeth of the last financial downswing, US taxpayers reported 13% less gambling earnings than the year before. The number of taxpayers reporting any gambling earnings dropped 6%. Unless all America’s gamblers suddenly hit a collective cold streak, these are far from cheery figures for an industry that was once considered recession-proof.

So how did gaming stocks fare Thursday? America’s land-based casino companies currently generate the majority of their revenues from Asian markets, but the big boys experienced sharp declines in New York. Wynn Resorts fell 7%, Las Vegas Sands was off 7.5%, while MGM Resorts was down almost 11%. All three experienced further losses in after-hours trading. Steve Wynn is probably delivering an anti-Obama rant to Fox News as we speak.

Most of the UK listed companies mirrored the broader index decline. Betfair continued its recent downward trend, dipping as low as 562.5p before closing at 567p; a loss of 3% on the day. Most of the other companies experienced a similar parallel slide, with Paddy Power and Ladbrokes each down 4%, William Hill off 3.5%, and 888 Holdings and Playtech were each down 2%.

Two companies took bigger blows. Sportingbet fell 4p to 49p, a 7.5% drop. Shareholders may pin the blame on Ladbrokes’ CEO Richard Glynn, who, in a conference call with investors, was asked how his company’s rumored takeover of Sportingbet was going. Glynn declined comment, which the market chose to translate as “not very well”.

The culprit behind the decline of Bwin.party (Pwin) is less clear cut. Pwin stock dipped as low as 113.8p (a new record) before closing at 116.9p, a loss of 5.7% on the day. Is this just momentum from the week’s downward trend, or are investors especially troubled by Pwin’s reliance on Euro-zone markets? Prior to the merger with PartyGaming, Bwin reported generating 11% of its net gaming revenue from Greece, a market currently as stable as a bowl of Jell-o in the Pwin cafeteria. European Commission President Jose Manuel Barroso is now warning governments that the financial strife experienced by the Euro-zone’s troubled ‘periphery’ markets of Ireland, Greece and Portugal is spreading to the region’s third and fourth largest economies: Italy (10% of Pwin’s group revenue) and Spain. Good times.

So what horrors will Friday bring? What was it Bette Davis said…