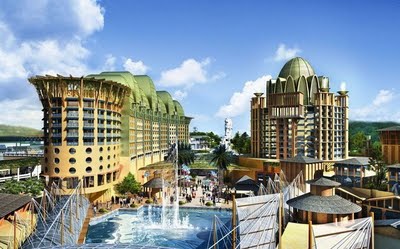 Genting Singapore has brushed off speculation that they’re on the wane and saw shares bounce by almost 6% earlier today. Rival Las Vegas Sands reported strong figures meaning that their only rival in the city also benefited. A local trader said, “People believe the gaming pie is increasing in Singapore, rather than Marina Bay Sands taking Genting’s share.”

Riding on those coat tails as they were, Genting were still hit with a rebuttal from another group of analysts. UBS said, “While strong Marina Bay Sands results again demonstrate the profit potential of Singapore market, we think in Q2 Resorts World Sentosa will struggle to deliver numbers that are as strong as Marina Bay Sands.”

Not so rosy after all for Genting.

Over in Macau the enclave is continuing to bask in the glory of everything gambling. The industry has made it so that in the first half of 2011 public revenue has seen an unprecedented increase. According to the Financial Services Bureau, it rose by 44.9% compared to the previous year with a total of MOP51.45 billion (US$6.43bn). The rise was down to that oh-so-gracious of jewels in Macau’s crown, the gaming industry.

Direct taxes from gaming were up 45.1% to MOP43.83 billion in a city that is continually looking at new ways to diversify should the gaming industry be advised to pack up and leave. Of the figures raised for the public coffers, around MOP5.24 bn was spent. That represented an increase of 61.4% compared with the year before and shows that Macau has some reserves when it comes to money.