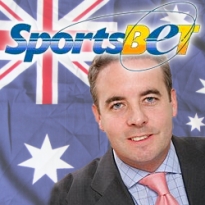 Barni Evans, lead marketer at Paddy Power, is leaving to take over as marketing director at Paddy’s two Australian operations, Sportsbet and International All Sports. During his 10-year tenure at Paddy Power, Evans was credited with many of the company’s signature campaigns, including the blind footballers kicking cats advert and the 270-foot Hollywood-style sign erected in full view of Celtic Manor, the site of 2010’s Ryder Cup in Wales. The cat-kicking ad was the most-complained about spot of 2010, although the Advertising Standards Authority ultimately decided the fuss wasn’t worth censuring the company, while the massive sign earned an injunction from an irate local council. Evans is expected to be working his attention-getting magic in Australia by September.

One of Evans’ first challenges will be to shift the current narrative surrounding Sportsbet. The company has been raked over the coals in the Aussie press after it was found to have fronted $80k credit to an unnamed problem gambler, who (predictably) lost the lot in under a week this May. Sportsbet subsequently sued the bettor for payment, prompting the man to file for bankruptcy. Sportsbet is licensed by Australia’s Northern Territory (NT), where extending credit is permitted, and thus none of the company’s actions in this case are considered illegal.

Nevertheless, the bettor’s plight has been championed by Liberal MP Alan Tudge, in whose constituency the man resides. Referring to the NT credit provisions as a “loophole,” Tudge has written to NT Chief Minister Paul Henderson asking for the practice to be eliminated. Should Henderson not be amenable to such change, Tudge vows to initiate his own legislation. “I think it is a significant moral hazard for [betting operators] to be able to [extend credit] … There’s a number of actions we can potentially take … I will be discussing it with the parliamentary committee which is just starting to look into internet gambling as well.”

Sounds like it’s time for a quick ‘blind-Aussie-rules-footballers-kicking-a-koala’ spot, Barni…