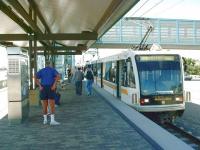 A report has criticized the way money is being spent on a light rail project in the Chinese gambling enclave of Macau. Anyone who’s watched that episode of the Simpsons will know how much of a scourge light rail systems can be. Their problems don’t have anything to do with the system falling into disrepair though.

The Audit Commission has criticized the Transportation Infrastructure Office for their management of the project. Costs have spiraled for the first stage of the project and the budget has more than doubled since 2007. Back then, estimates put the cost at MOP4.2bn ($525m). It has now hit MOP8.7bn and doesn’t include the MOP263.2m already allocated for 31 side projects.

“The lack of a global budget deeply hinders the global evaluation of the project’s financial needs” and could lead to “out-of-control expenses,” the report warns.

Those earlier mentioned side projects were also criticized as having been awarded without due care and attention in the report quoting the “urgency” with which the deals were done. The one saving grace is that light rail systems don’t usually require drivers. Imagine the bumbling job they might make of driver recruitment will make London Underground look like a walk in the park.

A method of contact-less payment used in the gambling enclave has had a successful year after recording impressive profits. Used by a number of different businesses, including transportation companies, Macau Pass saw profit of MOP1.9m in 2010, a year-on-year increase of 138%. The number of cards in circulation also increased 22.8% to 618,000 so at least if the light rail system gets off the ground, there’s a successful payment system in place.