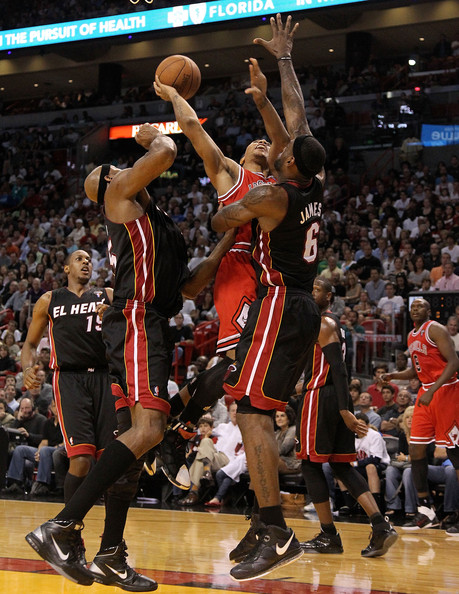 These two teams are very different both in character and in the way they play. After the Bulls beat Atlanta, their celebration was reserved, calm, expected. It was quite the contrast compared to Miami, who looked as though they had won the NBA championship after beating the Boston Celtics in the second round. Maybe it was because they knew a much bigger challenge lay ahead.

These two teams also win in different ways. The Bulls rely on two things: Derrick Rose and defense. They can’t win without either of them. NBA Coach of the Year, Tom Thibodeau has done an amazing job with the Bulls in making sure this team hangs its hat on defense. But the Bulls didn’t really have a choice if they wanted to win. It’s not like they were going to blow teams out of the water.

If there is a weakness of the Bulls, it is that they don’t really have any offensive players that can create on their own, aside from Rose and at times, depending on the match-up, Boozer. The rest of the offensive is predicated on Rose creating for others while carrying the bulk of the scoring load himself. It’s kind of the way LeBron played in Cleveland, and we all saw how that turned out when he went against the Big 3 from Boston.

The Miami Heat play defense too, but their attack is much more concentrated. Three guys on Miami are going to hurt you. That’s how they’ve played all season and that’s how they beat the Celtics. Wade, James and Bosh are going to do all the heavy lifting and Chicago is going to have to find a way to slow them down to have a chance.

Let’s get one thing clear. If Derrick Rose, the NBA MVP and the lone all-star on the Chicago Bulls can lead his team to the NBA Finals by defeating the Miami Heat and their all-star cast of LeBron James, D. Wade and Chris Bosh, then he’s not only the truth, he’s the second coming of Michael Jordan. But even Jordan had Pippen.

If it sounds like a tall order, that’s because it is. No matter how great Chicago defends, they still have to score points. And it’s hard to see the Miami Heat allowing Derrick Rose to beat them by himself. Someone else for Chicago will have to emerge as a consistent scoring option for them to have a chance, and it will have to be Carlos Boozer.

Boozer has the best match-up in the post. He can beast Bosh and Anthony and he can use his quickness on Big Z. Joakim Noah should be able to wreak havoc on the offensive glass which will give the Bulls second chance points. But the wildcard for the Bulls will be the play of Taj Gibson, Korver and Brewer. If those players can contribute off the bench and Korver can knock down shots to stretch the floor to allow Rose room to work, the Bulls could pull the upset.

Make no mistake, regardless of the Bulls regular season record, beating the Heat in a 7 game series will be an upset.

Nip it in the Rose bud

For Miami, it’s a much simpler plan. Let Boozer get his inconsistent points, keep Noah off the glass, accept the fact that Rose will get his, but don’t let him get everyone else involved. And then, contain him in the fourth quarter with either James or Wade or both guarding him.

Too many weapons for the Heat, it’s hard to see Bulls stopping their run to the finals. I’m sticking with what the bookmakers felt in the off-season when they placed the Heat as the favourites to win the NBA Championship. Heat in six.