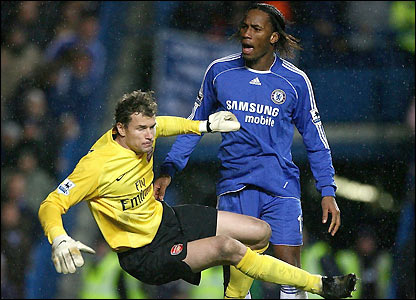 After a three-week period during which they’ve contrived to exit three cup competitions and suffered the usual implosion, Arsenal have today been making some rather violent rustlings.

Rumors are starting to come out of the North London club that former player and quite possibly the maddest goalkeeper to ever set foot in an Arsenal shirt, Jens Lehmann, is to return between the sticks for the Gunners.

That obviously doesn’t sound that good by itself, that’s before you consider that “Mad Jens” is a ripe 41 years of age. He’s a goalkeeper so it’s generally more accepted for them to be the elder statesmen of the team but this is a man who retired last year, after previously playing for five years with the North London club.

Don’t say it too loudly but they actually won a trophy when he was at the club.

It does come just two days after they were utterly flummoxed by the performance of another OAP of the game in goal for rivals Manchester United. The cup-tie they lost 2-0 on Saturday evening had a lot to do with United keeper Edwin van der Sar who has shown that he can still stop at the highest level.

It may also open up a number of betting opportunities as to whether they will play the controversial keeper and if he actually gets onto the pitch that will open up the floodgates.

Personally, it’s rather disappointing that he won’t be able to face Didier Drogba or Robbie Keane. Those were some battles and, without wanting to be too optimistic, there’s always next season.