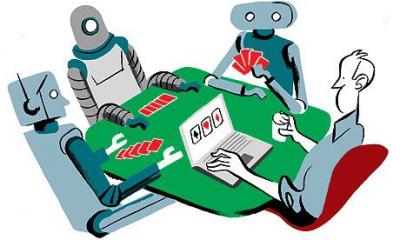 Over the past year, the online poker industry has seen bot scandals at the world’s two largest poker sites, PokerStars and Full Tilt Poker.

A New York Times article has now looked at the phenomenon of “poker bots”. The advances in technology have meant that they’re getting ever cleverer by the day. It’s not known whether they’ll reach the level of Watson the Jeopardy playing genius. Give IBM a go and I’m sure they can work their magic.

Entitled “Poker Bots Invade Online Gambling” it looks at the two scandals discovered at Stars and FTP over the past year and at its crux is an interview with the guy that uncovered the bot ring, Bryan Taylor (now an employee at Stars.)

As we reported in October, there are a number of sites where you can buy bots, the one at the centre of the FTP scandal Shanky Technologies selling licenses for around $129 per year for people to do as they please.

Co-founder of Shanky, Brian Jetter, told the NY Times that 400 of his customers were banned from FTP and had about $50,000 confiscated. Although he did add, he wasn’t sure why they were banning Shanky bots, as it costs FTP around $70,000 per month in revenue.

“They really must have wanted us gone,” Mr. Jetter said. “We don’t think the other poker rooms we support will make a similar financial decision.”

One conclusion that you can take from this is that the bots must be getting a lot better if firms like Stars and FTP are taking this kind of action.

Professor Tuomas W. Sandholm’s poker research group has long been at the forefront of bot development for almost a decade, and commented that bots “can rival good players, but not the best — yet.”

Although Darse Billings, a consultant to both Full Tilt and PokerStars, did comment, “The large majority of bots are very bad. More than 90 percent are losing money.”

Issues around bots will likely become a lot more important as more states continue to weigh up intra-state gambling. It’s likely that states that don’t experience a high amount of players might even look at bots as a way to make their sites more attractive. The fact that they aren’t looked upon highly by online players will only be more of an attraction to visit the sites.