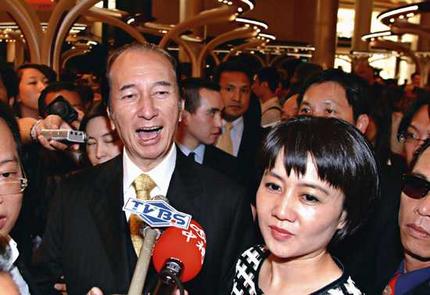 Macau and namely Stanley Ho’s extended family, of which there’s a lot of people, is currently looking a lot like the wake after his funeral. Unfortunately for all those present he’s still alive, well and truly in the middle of all the bitchin’, squabblin’, and arguin’ over the billionaire’s casino business. Macau doesn’t seem at all perturbed by any of this though.

The Macau government is reporting that casino revenue has jumped 33% in January from the previous year to $2.3billion thanks to a multitude of visitors from the Chinese mainland intent on gambling.

Analysts had cautioned that growth may flatten out from the record levels seen in 2010 but if these early figures are anything to go by it doesn’t looks as though this will be the case. However the figure of 18.57 billion patacas recorded this month was slightly lower than December’s 18.88 billion patacas.

“It is within my expectations. Chinese New Year is always a low season … 33 percent growth is quite decent indeed so that is why I am still confident with my full-year 29 percent growth outlook,” said Credit Suisse analyst Gabriel Chan in Hong Kong.

As far as Mr. Macau’s estate goes, according to reports from Bloomberg, the 89-year-old was yesterday admitted back to hospital in Hong Kong as the reports about whether he has filed a lawsuit against his family continued to conflict. This has also meant that shares in SJM Holdings, Asia’s biggest casino company, have fallen by 3%. Although it doesn’t sound like much, it’s not often that anything Ho touches doesn’t turn to gold.