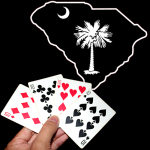 By a vote of 15-6, a panel of South Carolina senators endorsed a bill aimed at legalizing so-called ‘friendly’ games of poker in people’s homes. The bill, which now heads to the full Senate for approval, would replace an anti-gambling law that was written in 1802. That law has been selectively enforced over the years, most notoriously in a 2006 raid that saw 22 players arrested. That case is still being decided at the state Supreme Court.

The new bill would require poker players to have a ‘legitimate social relationship’. (Do Facebook friends count?) There would be no limit set on games, but the ‘house’ couldn’t take a cut. (So PartyGaming likely won’t be coming to town anytime soon.) Video poker, slot machines and ‘electronic gambling machines’ would be specifically banned. But one of those who voted ‘no’ on Tuesday, Sen. Chip Campsen, believes the bill provides “fertile ground for high-paid gambling attorneys to hammer away and create a loophole.”

Doubling down, the anti-gambling guy ironically named Chip warns that even minute changes to the law can have awful consequences. “This is not speculation. It’s history. We need to be really careful with every dot.” We assume Campsen is referring to the dots on Monopoly dice, which are technically illegal under the 208-year-old statute he’s seeking to preserve.

But Sen. Ray Cleary called bullshit on his fellow Republicans who wave “Don’t Tread On Me” flags while simultaneously speaking out against the new bill. “You say our Founding Fathers didn’t want so much government intrusion into personal lives. Yet, you’re the same group who wants to regulate what people do in their own homes.” Watch it, Ray, they might start demanding to see your birth certificate…