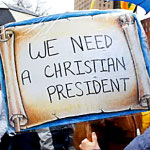 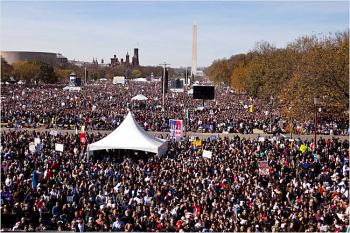 Thousands of people gathered on the Washington Mall on Saturday to take part in the Rally to Restore Sanity and/or Fear, hosted by comedians/pundits Jon Stewart and Stephen Colbert. The sizable crowd must have come as something of a relief to the organizers and moderates across the nation, as you just know Fox News hosts and the Tea Party crowd were dying to pull down their trousers and play ‘mine’s bigger’. But the rally is over, and it remains to be seen whether America is any saner or more fearful as a result.

While Stewart and Colbert bent over backward to avoid accusations of partisan intent, it seems obvious that they were hoping to motivate unenthused Democratic supporters to turn up at the ballot box for Nov. 2’s midterm elections. The Tea Party crowd needs no extra motivation. They smell blood in the water, and will no doubt show up in droves to ‘throw the bums out’ or, more accurately, ‘throw the old bums back in’. So if/when those old bums get back in, what does it portend for the online gaming industry?

Paddy Power has already pronounced the Dems dead on arrival, at least in the House of Representatives. If the Republicans do gain at least 39 House seats on Tuesday, the most likely candidate to take over Rep. Barney Frank’s chairmanship of the powerful House Financial Services Committee would be Rep. Spencer Bachus. Bachus is the polar opposite of Frank when it comes to the issue of online gaming, a man who sees no contradiction in proclaiming to be a staunch supporter of free markets and minimal regulation, then turning around and stating that all online gambling operators are criminals. So it’s a safe assumption that Frank’s HR2267 online poker legislation wouldn’t be worth the paper on which it’s printed.

In Nevada, incumbent Sen. Harry Reid is in a dead heat against Tea Party favorite Sharron Angle. The Senate majority leader has strong casino company support, winning the endorsement of Frank Fahrenkopf, president of the American Gaming Association. Fahrenkopf recently announced that the AGA had changed its traditional stance and was now “open to the concept of legalized online gambling,” specifically online poker. This is the same line of attack that Frank’s HR2267 was pursuing, but as noted above, it may not matter now.

Reid gained support from the casino industry through such work as his efforts to help save MGM Resorts’ City Center project from the bankers. Angle has lamented Reid’s intervention, stating that the markets alone should have decided City Center’s fate. At first glance, this reads like a perfectly valid libertarian position to take, but then Angle goes and says things like “The tenet of the separation of church and state is an unconstitutional doctrine.” In other words, the government has no business interfering with the marketplace, but the (Evangelical Christian) church should not be prevented from interfering with the government.

And this is where the assumptions that the Tea Party represents some new force in American politics fall apart. This is an old soldier in a new uniform. The Tea Party isn’t a new political movement, it’s a Trojan Horse, and hidden inside are the same social conservatives spewing the same hate-filled moralizing America was supposed to have grown tired of. True to form, they can’t even wait until they are wheeled inside Troy’s walls to leap out and start implementing their real agenda. Case in point — five Tea Party-backed Senate candidates would prevent a woman from having an abortion, even in cases of rape or incest. Sound familiar? True libertarians want government off their backs. Social conservatives want government off their backs, and onto the backs of their enemies.

So, to our American readers heading to the ballot box on Tuesday, by all means, vote for whomever you like, just think hard about who (and what) you’re voting for.

Online gaming and the US midterm elections – an alternate view
Steven Stradbrooke
21 October 2010
.