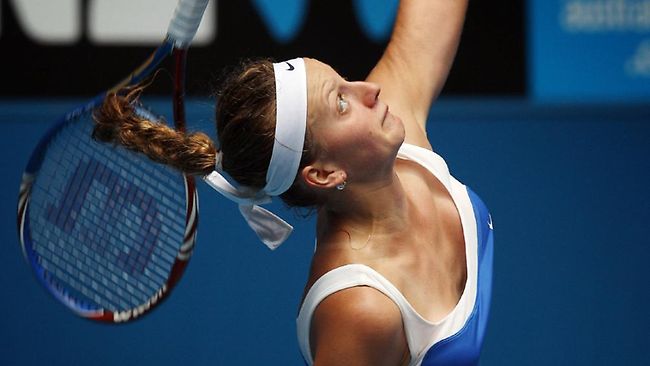 Tennis has long been a sport that has given a lot of men reason to smile whilst watching beautiful women batter a ball across a net to each other whilst grunting as if in the middle of a passionate lovemaking session.

Australia is currently playing host to the first major of the year in Melbourne, and as we enter edge towards the semi-finals many viewers will have been struggling to contain themselves. This is because the player with a neckline that has plunged new depths is still in it and there might have been a chance for tennis to open up to the amateur nudity market.

Due to this, according to the Herald Sun, Australian TV station, Channel Seven, has had to change their camera angles in order to avoid showing too much of 20-year-old Czech sensation Petra Kvitova. The decision was made after fears of a row over a slip of her clothing whilst she is serving, meaning the cameras are not shooting from a lot higher.

After winning the Brisbane International earlier this month she’s currently on a nine match unbeaten run and at a career best of 29 in the world rankings, and in with a real chance of winning her first major.