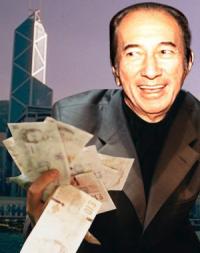 From what I hear, aging is a pain in the ass. Given the fact that I’ve been 27 years old for the past five years, I personally wouldn’t know. But time catches up to all of us, even billionaire gaming tycoon Stanley Ho.

At 89 years young, it appears Ho is putting his succession plans in order for his offspring. According SJM, in a move that serves to hasten the succession of Ho’s Macau empire, Ho gave up a 31.7 percent stake in Sociedade de Turismo e Diversoes de Macau to two companies owned by members of his family.

According to Bloomberg, Ho last month transferred his 7.7 percent stake in SJM to companion Angela Leong, mother of his five youngest children. Shun Tak Holdings Ltd., a property developer that also operates ferries between Hong Kong and Macau, on Dec. 2 said Ho cut his direct ownership in the company in favor of two holding companies in which his children have stakes.

Ho has had his share of medical issues, which should be expected for a man of his age. But with Ho moving out of the picture questions have to be raised about the future of his empire.

In an article in Bloomberg, Andrew Sullivan, director of institutional sales at OSK Securities Hong Kong Ltd was quoted as saying “He’s (Ho) been the real strength… “Now, instead of dealing with Stanley, you may deal with a lot more people. It introduces a huge element of uncertainty in what is already a cut-throat business.”

Investors are thinking the same way, SJM fell 4 percent to HK$13.80 at the 4 p.m. close of trading in Hong Kong after having slid as much as 8.9 percent earlier. There shouldn’t be too much panic, Macau is expected to grow 30 percent this year and Ho’s empire should soak a good part of that growth.