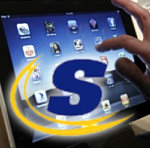 Apple sold 13m iPads last year, and projections are that they could move 45m units in 2011. An additional 10-15m in sales will be divided amongst the host of iPad imitators that went on display last week at the 2011 Consumer Electronics Show in Las Vegas.

Companies like Motorola, Toshiba, Research In Motion and Dell were all hawking tablets, some with features the iPad doesn’t yet offer, like dual cameras to enable video chats. While some of these devices run on proprietary operating systems, many of these new tablets will operate using the Honeycomb version of Android. We emphasize will because the tablet-optimized Honeycomb hasn’t yet officially been released, so many of the tablets on display at CES were still running the smartphone version of Android, leaving the hawkers unable to demonstrate their new wonder product to its full potential.

That wouldn’t fly with Canadian firm Score Media Inc., who own the Score Television Network, along with satellite radio and online services. The company posted a 4% revenue boost in the past quarter, and while net income slipped 21% to $839k, the company is focused on the fact that its mobile apps are getting 75m page views a month. Mobile ad sales were up 140% and are credited with much of the company’s momentum, so Score is doubling down. The company recently acquired a 20% stake in NuLayer Inc., the company that developed theScore iPad app.

Jonathan Savage, Score VP of digital media, thinks the marriage with mobile was a no-brainer, given the devotion sports fans gave the company’s TV ticker. “We’re known for data, and hardcore sports fans know that we try to deliver that same experience on any app or device.” After their first app proved a hit, they released a second devoted to football/soccer. The reaction was so positive that Score CEO John Levy says that 60% of the company’s growth comes from outside Canada, “where no one’s ever really heard of the Score TV network.”

Chances are at least some people attending the upcoming festivities in London will get to know Score before they head back to their home territories. According to the Toronto Star, Levy is UK-bound and eager to explore the idea of developing a gambling app, limited to jurisdictions where sports betting is legal. His pitch is supposedly along the lines of “we have a million users of our mobile app here in your country”, a line that Levy expects should be “something they can take seriously.”