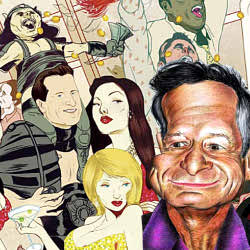 Hugh Hefner, the 84-year-old Playboy magazine founder, has reached a deal to take his company private, reversing the decision he made in 1971 to take the company public. With equity backing from private investment firm Rizvi Traverse and a debt commitment from Jefferies & Co., Hefner’s Icon Acquisition Holdings LP will pay $6.15/share for the 30% of voting shares and 72% of non-voting shares that Hef doesn’t already control.

That licensing model is already on display in China, where some 300 licensed stores are already in operation hawking Playboy-branded goods, and one Playboy club already open in Macau and another due to open in 2012.

Frankly, we think the presence of branding exponent and staunch private company advocate Calvin Ayre in the most recent issue of the magazine must have sealed the deal in Hef’s mind. And we’re sure Calvin would applaud Hef’s decision, as he believes you have to be private to maximize the value of a ‘sin’ brand like Playboy. Calvin would further suggest that Hef ditch the US, move to London, Singapore or Macau and get into the gambling business — both online and brick & mortar.

However, there’s another of Hef’s recent decisions that Calvin would never endorse. That would be Hef’s engagement to 24-year-old Crystal Harris. We ain’t saying she’s a gold-digger… But seriously, dude… If it flies, floats or fucks… rent it.