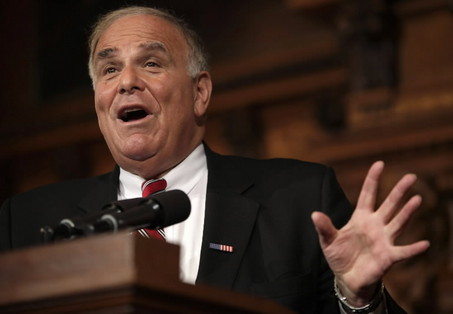 This Sunday the CBS news magazine program “60 Minutes” will feature gambling prominently. Leslie Stahl will report on the proliferation of gambling in 38 American States.

Reading the summaries of the show, it doesn’t look like it will show the American land based casinos in a positive light. The feature will focus on the expansion of slots machines and how some scientists believe they are designed to create gambling addictions.

It’s doubtful that the show will be something people in the industry are looking forward to, as it’s unlikely to portray the positives of the gaming industry but there is one moment that could make it must see TV.

In the clip first reported by the Philadelphia Inquirer shows Stahl pressing Rendell about the proliferation of slot machines throughout Pennsylvania. Rendell was saying that the upsides far outweigh the negatives, saying the “biggest downside is people lose their paychecks.”

Rendell clarifies his statement, “They’re not losing their paychecks because Pennsylvania instituted gaming. These people would (otherwise) be going to Atlantic City or the racetrack.”

Stahl continues pressing with the questions and Rendell said, “You guys don’t get that. You’re simpletons. You’re idiots if you don’t get it.”

As I said, I doubt the 60 minutes feature will give you a fair assessment of they gaming industry as a whole like you get CalvinAyre.com but it might be worth watching a politician lose his nuts on national TV.