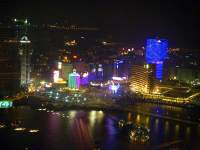 This year’s version of the Asian Poker Tour have already announced that you can enjoy the “Rock Star Treatment” in the Hard Rock Casino and Hotel where it’s taking place. APT followed this up with the announcement that the “Tiger Woods of Poker” Phil Ivey, would be shimmying over to Macau for the 2010 stop. Now the long awaited schedule has been announced for the eight day long event.

The main event, which stipulates a buy-in of HK$32,500 + HK$2,500, has three starting days (1A, 1B, and 1C) on Sunday 7th November, and also the 10th and 11th of the same month. After these days have yielded enough players for day two, this will begin on Friday 12th, Saturday 13th seeing day three, before the final ten face off on Sunday 14th to see who will be crowned the APT Macau 2010 champion.

With an EPT title still illuding Ivey, he could add an APT to his already impressive wrist that is weighed down by eight WSOP bracelets. A full schedule for the eight days is can be seen here.