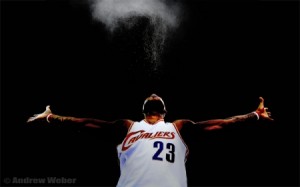 Lebron James joined exclusive company on Sunday when he was awarded his second MVP trophy in consecutive years. Point blank, Lebron James is best player in the NBA and at this point I feel comfortable saying it’s not even close. It was a no brainer to bet him to win the MVP award this year again and the only shocking part was he wasn’t the unanimous pick.

No player does more for his team than Lebron James. He’s a couple assists and rebounds shy of averaging a triple double and that’s in addition to the 30 spot he’s almost guaranteed to give you on a nightly basis. Well, 32 ppg if you’re talking about the postseason. And it’s the postseason that Lebron is truly starting to show his dominance.

In Game 1 against Boston, much had been made of Lebron and his gimpy elbow, it probably swayed some bettors to think that Boston might be able to steal game 1. Those bettors learned a valuable lesson about Lebron James, I know I did after his 35 point 8 rebound and 8 assist performance en-route to a Game 1 victory.

Lebron showed us a little bit of everything in Game 1. He showed us his post game, he showed us his three point range, he showed us his mid range, his passing, his floaters, he gave us the full meal deal. I know he hasn’t won a ring yet, and that limits him where he ranks among the all time greats, but I will say this, I don’t believe there’s been a more complete or better basketball specimen since Michael Jordan or Wilt Chamberlain.

Statistically, aside from Karl Malone he’s already arguably the greatest player who has never won a championship to ever play the game and he’s only twenty five years old.

In my heart I feel this has to be his year to win it all. Ironically, he’ll have to go through the Boston Celtics who knocked him out of the playoffs two years ago. Game 2 tips off tonight, my conscious won’t let me bet against the King. I’ve already punched my one way ticket on the Cavs hype train all the way to the NBA Finals. After watching Lebron’s performance this season, I was so far on the King’s jock I had to check myself just to make sure I was still heterosexual. How embarrassing.

For those of you keeping it real and who haven’t sold out and are still able to objectively look at the NBA playoffs without getting a hard on every time Lebron throws powder in the air, I pose this question, does Boston really have a chance in hell? Read more.