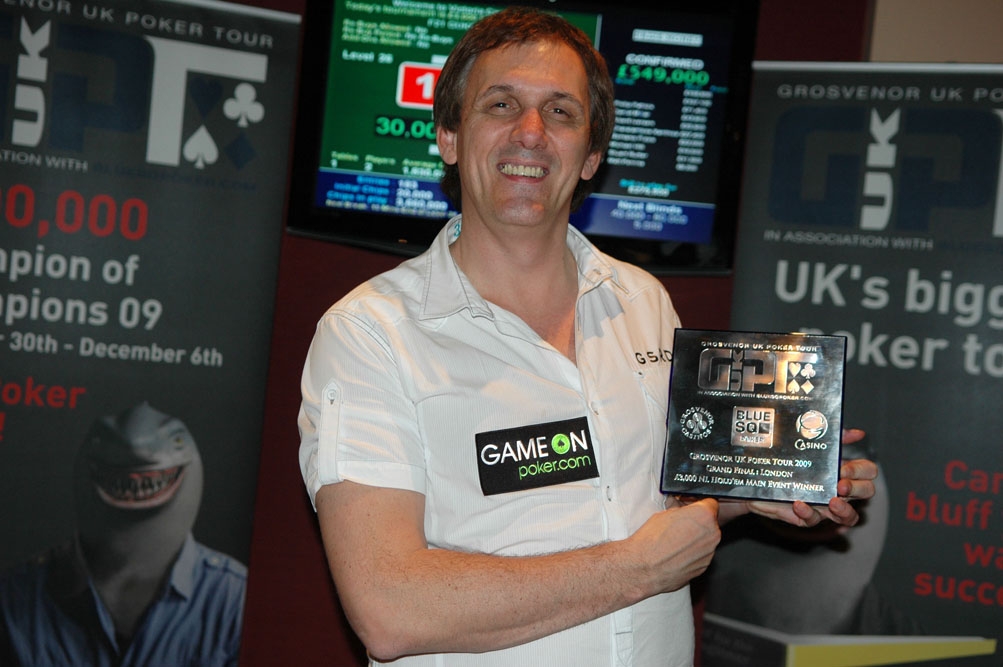 I was delighted to learn that Tony Cascarino won the Grand Final of the 2009 Grosvenor UK Poker Tour last night.

I had the good fortune to chat with Cascarino over dinner when he won the Bolton leg of the 2008 tour and found him to be great company – even if he did refuse to give me an interview on the grounds that he was working for a rival national publication.

The other reason this result pleases me is because celebrity players often have to work twice as hard to get the recognition they deserve. Fellow card professionals and even poker journalists tend to look down on the likes of Cascarino as fortunate has-beens who haven’t had to pay their way in the game and who are just living off the fame acquired in a completely unrelated sphere.

But everyone should be judged on their merits and while Cascarino’s status as a former footballer doubtless helped him into the world of poker, he has done more than enough to earn respect, winning a tournament in each of the last four years. He is also a devoted Omaha player.

The former Republic of Ireland international is an engaging character – one of very few footballers who has written an autobiography worth reading. He told me that his former president at Marseille, Bernard Tapie, once tried to beat him up in the changing rooms after a match because he was convinced he had been bribed by the opposing team to miss a string of sitters. The irony that Tapie ended up in jail for match-fixing.

Poker needs colourful individuals like Cascarino to raise the profile of poker in this country and the Times columnists’ £168,800 payday will certainly bring a good deal more national exposure to the sport in the UK. “I’ve been moaning all year, ‘cos nothing good has really happened to me,” he said last night. “I’ve won something [in poker] every year for the last four years, but until now 2009 has been frustrating.”

He added: “I got divorced earlier in the year and I’m delighted that she [my ex-wife] won’t be getting her hands on any of this. She’s already had enough out of me.”

Not only did Cascarino outclass a field of 183 runners in the Blue Square sponsored event, for which players could also qualify online, but his win was all the more impressive for the fact that he went into the final table wit the second-lowest chip count. Frenchman Antoine Arnault, the Head of Communications for avant-garde fashion house Louis Vuitton, had the lowest count of all and yet he too made it down to the last two – and the pair’s fortunes see-sawed in a dramatic heads-up finale.

Cascarino, who finished sixth in last year’s Grand Final, eventually won by drawing a flush on the river to seal a victory that takes him to the top of the all-time GUKPT money list, with almost £250,000 in winnings. Not bad for a celebrity player, eh?

“Getting respect from your peers and being acknowledged for being good at whatever you do with your life means a lot to me,” added Cascarino. “I think I have proved myself now.”

His opponent Arnault was gracious in defeat and will be heading back to France with £107,100 for his second place finish. Small change it may seem, as his father Bernard Arnault is the 14th richest person in the world with an estimated net worth of $16.5 billion.