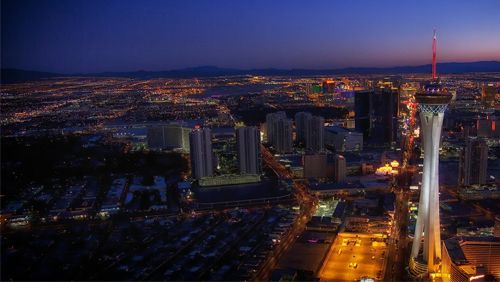 The ties between mobsters and the early days of Las Vegas are well-documented. There has been plenty of attention given to the subject over the years, and one of the figures said to have helped mob bosses get their hands dirty in Sin City was Jimmy Hoffa. At the time, he was in charge of the International Brotherhood of Teamsters (IBT), having served as its president from 1957-71. He reportedly provided, illegally, millions of dollars in the way of loans using the union’s Central States Pension Fund and, when the heat got to be too much, suddenly disappeared in 1975, reportedly taken out by the mob itself. However, no one ever came forward to admit to killing Hoffa and the whereabouts of his body have remained shrouded in controversy. If two journalists from Fox News are to be believed, the search may be over.

Hoffa has been the subject of multiple movies and documentaries over the years and was portrayed by Jack Nicholson in an eponymously-named filmed. The Irishman, a movie by Martin Scorsese in 2019, rekindled the interest in locating Hoffa’s body and the theories that surround his disappearance. Some say he was “offed” by a friend; others say he was “whacked” by a mafia hitman. However, at the core of all of the rumors is a link to Hoffa’s demise at the will of the mob.

Eric Shawn and Dan E. Moldea of Fox began looking into Hoffa’s disappearance as part of a new documentary for the media outlet, and uncovered something they believe to be a positive identification of Hoffa’s location. Moldea was one of the first to document the controversial disappearance, publishing The Hoffa Wars in 1978. As part of the journalists’ investigation, they interviewed Frank Cappola, the son of the man who claimed to have buried Hoffa, Paul Cappola, Sr. Frank had been told where the body was buried, but swore secrecy and promised his father he would never reveal the location. However, perhaps knowing that his own demise was imminent, Frank broke that vow and shared his secrets.

Hoffa is reportedly buried just outside the property line of an 88-acre landfill in New Jersey – a landfill previously owned by the Genovese Crime Family mobster Phil “Brother” Moscato and Paul Cappola. He is said to have been shoved in a 55-gallon steel drum that was put in the ground before other drums were thrown on top. The journalists visited the site with ground-penetrating radar that reportedly detected a number of “round anomalies” right where Cappola said they would be. Moldea finds it difficult to contain his excitement, asserting, “Frank’s story is the best darn story that I have heard about this case in the 44 years since I first started investigating Hoffa’s murder.”

The man who financed Las Vegas may have been unceremoniously packed into a drum and disposed of like yesterday’s trash, but it still isn’t known for sure. Fox can’t dig at the location, due to New Jersey state laws that prohibit the excavation of 45-year-old mob-tied bodies, and is now hoping it can get some help from state law enforcement to proceed. Things don’t always move quickly in the Garden State, so it might take a while for the dump’s secrets to be revealed.