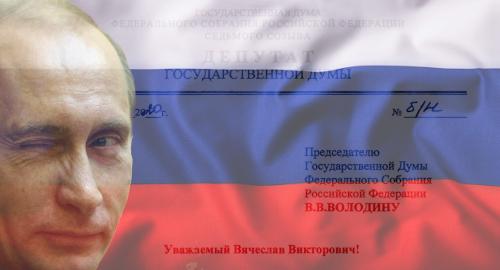 Russian sports betting operators may soon find themselves under the watchful eye of a new gambling regulator, whose chief responsibility appears to be ensuring collection of controversial new taxes.

Last Friday, two deputies of the ruling United Russia party submitted new draft legislation to the Duma that aims to amend gambling laws to create a ‘Unified Gambling Regulator’ under the control of the Ministry of Finance. On Monday, Bill No. 1055657-7 was forwarded to the Committee on Economic, Policy, Industry, Innovative Development and Entrepreneurship for further discussion.

The new regulator will be tasked with getting even tougher with unauthorized gambling operators, particularly internationally licensed sites that offer products currently prohibited in Russia, including online casino and poker games. But the regulator will also be responsible for ensuring Russian-licensed bookmakers pay increased contributions to local sports bodies.

To ensure compliance with the new tax, 1055657-7 proposes scrapping the current system of online payment processing hubs, under which Russia’s two rival bookmaker associations (SROs) each operate their own hubs, known as TSUPIS.

Instead, the bill envisions a single payment hub that will monitor all betting transactions and deduct (in real-time) the new sports betting tax. Crucially, the tax won’t just be deducted from wagers on Russian sports but also wagers on international events.

Reaction to the draft bill has been swift, with Nikolai Oganezov, president of the First SRO of Russian Bookmakers, issuing a statement saying the government appeared less concerned with funding sports than with “the destruction of a well-functioning and only positively proven mechanism.”

Oganezov said the activities of the TSUPIS systems have been “transparent” and have resulted in “no complaints” during their roughly four years of operation. Oganezov suggested that the bill’s authors have no “relevant experience and knowledge” of either the sports or bookmaking industries and suggested that the bill was intended to bring about the demise of the SROs.

Yuri Krasovsky, president of First SRO member Liga Stavok, said the increased sports duties would leave bookmakers with little choice but to “either break or significantly reduce the amount” of their local sports sponsorship deals. Krasovsky also noted with some suspicion the that Ministry of Finance planned to direct the increased sports contributions to the federal budget rather than directly to local sports bodies.

Parimatch Russia CEO Dmitry Sergeev said the increased tax would fail to achieve the government’s stated objectives because smaller bookmakers would likely cease to operate, thereby diminishing the government tax-raising potential. Bettors and smaller sports leagues will also suffer as bookmakers opt against offering markets on secondary sports rather than ante up RUB5m per quarter if turnover doesn’t hit a certain threshold.