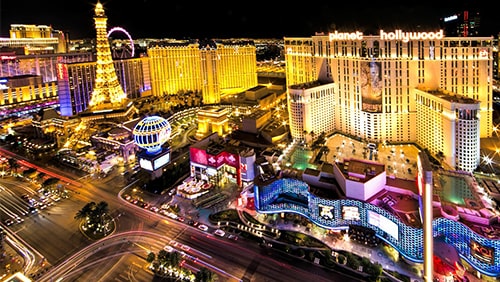 Las Vegas casinos continue to grapple with a rising issue of violence along the strip, with several high-profile incidents over the last month. The latest of these saw South Point Hotel Casino security staff shoot an armed man. According to reports, the assailant had fired a weapon and refused to drop the gun outside casino property.

At a press conference, Las Vegas police officers praised the conduct of the security team at the South Point Hotel Casino.

“Those security officers showed a tremendous amount of strength due to the fact that there were concerns for their backdrop, being the valet area of the hotel.”

This isn’t the first-time casino staff have been forced into action. Police were called to the MGM Grand Casino after reports of a shooting inside the casino. Two people got into an argument on the casino floor and one produced a fireman. One casino patron attempted to disarm the man, and one round was fired when the gun dropped on the floor. The weapon was turned over to casino security personal, as local police continue their search for the suspects involved in the incident.

Las Vegas police have attributed the rise in gun violence on the strip to an increase in visitors from outside Nevada. Police have been forced to beef up security on the strip; local news has reported that authorities confiscated more than 63 illegal firearms over the last two months.

Local casinos and resorts remain cautiously optimistic that the tide is turning in the battle against gun violence on the strip. Operators have continued to add to their layers of security to address the rise in violent crime.

Wynn Resorts have added a K-9 team to their security at the Wynn Las Vegas and Encore Hotel-Casino on the Strip. Guards will scan visitors with metal detectors and search handbags.

The Cosmopolitan Hotel-Casino has also beefed up their security. The hotel will now only allow members of the public who have a reservation or rewards members from 6 pm. All guests will be expected to submit to bag and metal detector searches before entering the hotel.

The move is seen as a positive by local operators who were only allowed to reopen in June following temporary closures due to the Covid-19 pandemic.