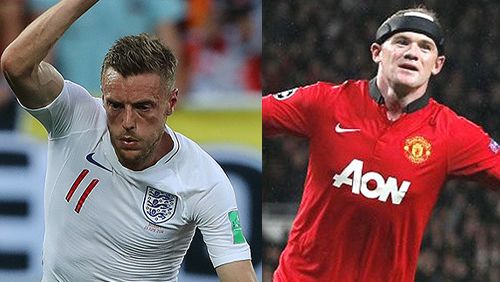 The two careers of Jamie Vardy and Wayne Rooney have always been interesting to watch as each flourished at different times, with each man’s highlights reel containing spectacular goals, phenomenal personal achievements and more than a few controversial moments along the way.

Viewed as a timeline alongside each other, however, how does each man compare to the other at different ages? As was remarked across the world this past weekend, Jamie Vardy scoring a hat-trick at The Etihad on the same weekend that Rooney, just a year older at 34 years of age, was playing for Derby in a 4-0 home defeat by Blackburn shows that the latter section of each man’s biography read very differently.

Over the course of their careers, when was Rooney the best and at which moments was Vardy on top? Let’s take a look at the seven eras Vardy and Rooney have seen their careers evolve within.

Like many young teenagers, Jamie Vardy wasn’t thinking about professional football. Part of the Sheffield Wednesday youth set-up, the young Vardy was released by the club he supported and would join up with the youth squad of the Stocksbridge Park Steels, a team based in South Yorkshire.

At the same time this was going on, a 16-year-old Wayne Rooney was about to be introduced to the Goodison Park crowd, making his home debut for Everton in a game that no-one would forget the last minute of. ‘Remember the name?’ We could hardly forget it, could we?

Playing for the Steels, the young Vardy made his way through the youth set-up during this period, eventually being selected for the Steels reserves and making his first-team debut in 2007, playing for the manager, Gary Marrow. Vardy was earning £30 per week at this stage of his career.

Rooney, of course, was flying. Having signed for Manchester United in 2004 after a spectacular Euro 2004 in which Rooney’s injury was the only thing that prevented him dominating the tournament, Rooney’s first three seasons with United saw him help Ferguson’s side overhaul Chelsea, who had reinvented success under Jose Mourinho. It is perhaps not the title-winning year of 2006/07 that will stick in the memory of Rooney fans through this period as the stunning debut he made back in the Champions League against Fenerbahce in 2004. A better debut hat-trick you simply will not see.

Vardy’s non-league career stalled somewhat in 2007, due to the striker being convicted of assault and being required to wear an electronic tag for six months and having a curfew put on his time. Despite spending a week on trial with Crewe Alexandra and being offered a short-term contract with Rotherham, Vardy remained at Stocksbridge Park Steels.

Wayne Rooney’s star could hardly have risen any higher during this period. Winning the Champions League the year after winning the Premier League in 2007/08 was an incredible achievement, and this success was followed by another league title in 2009, bringing about United’s third in a row.

Despite this success, Rooney went on a rant about England’s fans booing the national team as the lustre attached to Rooney’s early career seemed to fade at the 2010 South Africa World Cup.

Vardy really put the hours in during a frenetic two years of non-league football which would pave the way for a Premier League career after all. Signing for Halifax Town for £15,000, Vardy moved on just one year later to play for Fleetwood Town. He was a talisman for both teams, and would then be sold to Championship side Leicester City in 2012, in a deal worth £1 million rising to 1.7 million, a deal that made non-league history.

In what would ultimately be remembered as a period of total chaos, Wayne Rooney refused to sign a new united deal, fell out with fans, had an altercation with the tabloids as accusations of infidelity rang around him and then returned to form with a quite ludicrous overhead kick in the Manchester derby. Just when you think Rooney had lucked out, this goal pulled him back in.

Wayne Rooney’s fall from grace between these years is telling, as the weight of expectation seemed to lay heavy across his shoulders. A final Premier League title in 2012/13 was followed by a period of uncertainty, with Sir Alex Ferguson doing all he could to rid the club of the boy he signed nine years on. Instead, David Moyes arrived and made Rooney captain, and when he lost his job after less than a whole season, Louis Van Gaal did the same. There was even a question of potential discord between Rooney and Vardy at an England press conference at Euro 2016.

Jamie Vardy grabbed the opportunity at Leicester with both hands, helping the club to the Championship title just two years after he joined the club. Having cemented his own future during this time, Vardy took to the Premier League like a duck to a pond, scoring bags of goals and helping the Foxes in their ‘great escape’ from relegation in 2015. Sure, around this time, he might have been given a warning for racist words in a casino, but other than that, Vardy was on the up, and it was to get even better. Winning the Premier League title in 2015/16, Vardy’s screamer against Liverpool was a moment in time ono Leicester city or Premier League fan will ever forget.

Eventually, it took the arrival of Jose Mourinho to move Rooney on and United and England’s record goalscorer signed for his boyhood club of Everton in the summer of 2017. While Wayne Rooney’s sole season with Everton wasn’t an unmitigated disaster, just 10 goals in 31 games told enough of a story. Rooney was off to America and would play 48 times for D.C. United across the next two seasons, scoring 23 goals at a slightly kinder pace to legs that had been overused in the English Premier League.

In the same era, Jamie Vardy went from strength to strength as one of the Premier League’s best players. Vardy’s 41 Premier League goals in 78 games after winning the title were impressive enough, but his game had changed post his international retirement, frequently turning provider to become a more well-rounded player. Vardy’s new lease of life outlasted Claudio Ranieri and Craig Shakespeare’s dismissals, though Claude Puel’s methods weren’t as liked by the player himself.

One of Vardy’s last goals for England was this absolute gem in Germany as England came from behind to triumph 3-2.

While Wayne Rooney’s career had become one of more controversy due to a drink driving incident in America, he was still England’s best hope up front for some time, eventually retiring in 2018 after becoming his nation’s top scorer with over 50 goals. Rooney’s time at DC United came to an end as The Rooneys returned to Britain and Wayne was persuaded to become part of the rebuilding project at Derby County. To date, Rooney has played 20 times for The Rams, scoring just five times in a much deeper role as ‘quarterback’, or deep-lying playmaker.

Vardy, meanwhile, scored a hat-trick away at the Etihad Stadium on Sunday night, and under the tutelage of Brendan Rodgers, signed a new contract extension just this summer which will see him remain with the Foxes until 2036 at the earliest. With last season’s Premier League Golden Boot award for 23 top-flight goals, having scored over 20 goals in a Premier League season, Jamie Vardy is just as priceless to Leicester City as he ever has been.

His second hat-trick against a Pep Guardiola side – not something even Lionel Messi can claim to have done – underlined that fact last weekend.