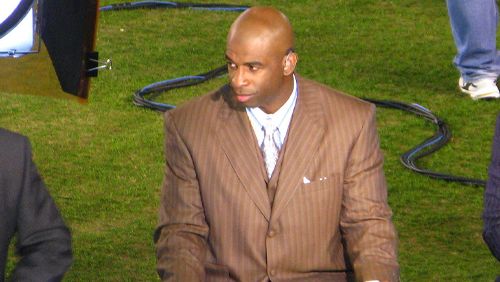 Deion Sanders has spent the past 14 years as a football analyst with the NFL Network. Prior to that, the 53-year-old had spent 14 years as an NFL standout, earning two Super Bowl rings and a number of awards for his on-field talents. Despite his extensive knowledge and fanbase, the NFL Network has decided it can no longer afford to keep Sanders around, and the two are parting ways after being unable to agree on terms for a new contract. Sanders could easily walk away and retire, but that’s not his style. He’s almost certainly going to remain a huge part of sports and, apparently, is on his way to Barstool Sports.

Sanders and the NFL Network were unable to reach an agreement regarding how much the player/coach/analyst was worth, forcing Sanders to call it quits. The network had already made it apparent that the Hall Of Famer’s time with the company was coming to an end when it decided to drop his 21st & Prime show last year. That move was made as a way for the network to cut expenses, but the writing was on the wall at that point – no pay increases would be coming.

While working as an analyst, Sanders was also serving as the offensive coordinator at the school his sons attend, Trinity Christian School, and could have sought a coaching position at any level. He had previously looked to become a coach at Florida State University, his alma mater, and the news of his departure from the NFL Network led to rumors that he could be once again looking for another shot. However, he perhaps has learned to enjoy his time in the booth.

Barstool Sports announced yesterday that it had managed to rope in Sanders to be part of its growing team. The sports media company includes the program Pardon My Take in its portfolio, and the Apple Podcasts offering confirmed on Twitter that Sanders was on board. It tweeted, unceremoniously, “…HUGE announcement & interview with our new coworker @DeionSanders…” Scoring one of the biggest names in football would have probably been worth a larger celebration.

Sanders is going to be able to revive his former NFL Network show on Apple Podcasts, with 21st and Prime ready to make a return. He will also be seen in Barstool videos, as well as on its Pardon My Take show on Sunday nights during the upcoming NFL season. There hasn’t been word on how much Sanders will get paid for his new gig, but he certainly won’t come cheap. Barstool has the money, though, having just handed itself over to Penn National Gaming for $450 million earlier this year.

As big a coup as it is for Barstool, the controversial company hasn’t always given its new recruits a warm welcome. Pat McAfee retired from the NFL to specifically go to Barstool a few years ago and Michael Rapaport had a following out with Barstool founder Dave Portnoy after he was tapped to join the team. Both ended up leaving, but perhaps (unlikely) Barstool has learned from its mistakes.