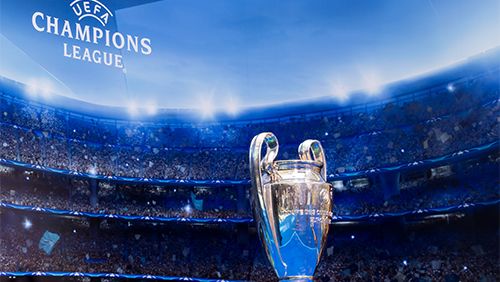 With just days until one of the closest-fought Champions League knockout stages in recent years resumes, who are the favourites, and which outsider could come from nowhere to land a shock victory amid a global pandemic? We take a look at the clubs who might look back on the next few weeks as the most important in their club’s history.

It’s easy to see why Bayern Munich (7/2) and Manchester City (15/4) are the two favourites, with both sides looking highly likely to make the quarter-finals. The 8-times straight German Bundesliga winners Bayern Munich have signed Leroy Sane from Manchester City, but their new left wing-forward will be watching his new team-mates from the sidelines as they try to beat Chelsea in the second leg of their Last 16 tie, already 3-0 up from Stamford Bridge game.

While Manchester City have a 2-1 lead from their away leg, it was at the Bernabeu, and Real Madrid have been in fine form to clinch the La Liga title back from their deadly rivals Barcelona. Madrid will need to win by two goals or with three goals and up to win the tie outright, with extra-time a possibility only if Los Blancos win 2-1 on the night at The Etihad.

But who of the two favourites have what it takes to go all the way?

Verdict: Take Bayern Munich at 7/2. They’re a solid bet to make the final and will be well rested after the Bundesliga ended a few weeks ago.

While Paris St. Germain are well-fancied with many pundits this year and are as short as 5/1 with some bookmakers (the Ligue 1 champions are a best price of 11/2) we’d avoid the Parisians. Kylian Mbappe’s injury in the French Cup Final last week showed that with the Ligue 1 conclusion cancelled, the French champions may be a little out of shape and prone to muscle injuries. A condensed conclusion to the Champions League goes directly against what would suit them.

Atletico Madrid showed how dangerous they can be as they dumped holders Liverpool out of the competition at Anfield, winning 3-2 and exposing the Merseysiders defensive failings in one of many defeats The Reds suffered since February. With Diego Simeone in charge, anything is possible and at a best price of 9/1, they could be good picks.

We’d avoid both Barcelona and Juventus despite the obvious mercurial talents of Lionel Messi and Cristiano Ronaldo being on display for the respective sides. Both teams look wide open at the back at times and frail to counter-attacks, which in the Champions League can spell doom.

Verdict: Take Atletico Madrid at 9/1 or pick them to reach the final at each-way odds of 3/1.

While we’d have to write off the chances of Chelsea on the basis that they’ve left themselves too much to do, we can’t say the same for any of the other outsiders still in with a chance of landing a shock Champions League victory.

Lyon stand a chance despite their tough opponents in Juventus, purely because the French side won their home leg 1-0, conceding no pivotal away goal. Should they score in Turin, then The Old Lady would need three goals, unlikely in 90 minutes no matter the power of Cristiano.

While RB Leipzig have been a breath of fresh air, particularly against Tottenham Hotspur in this year’s competition, the fact they have to beat Atletico counts against them and we’d discount them on that basis.

Atalanta face stiff competition in Paris St. Germain, but with the French champions out of shape by comparison to the strong Italian title-chasers, we think there could be a shock on the hands. Taking the Italian side means that should they and Atletico make it through the quarters, we’re guaranteed a pick in the final at very decent odds.

Verdict: Atalanta are unmissable at 10/1 and could go all the way.

With the resumption of Champions League games from August 5th, it’s sure to be a very dramatic end to the European football season and we’ll be following it all the way here at Calvin Ayre.