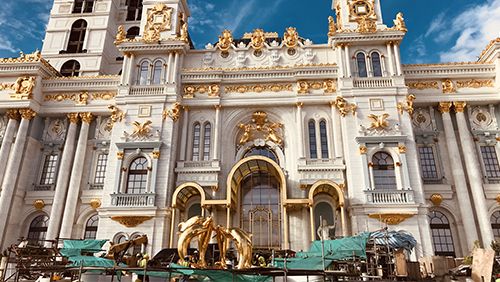 It has been just over two weeks since Imperial Pacific International (IPI), the controversial casino operator behind the Imperial Palace in Saipan, was given two weeks to settle all its outstanding debt with the government of the Commonwealth of the Northern Mariana Islands (CNMI), as well as with its business partners. The “or else” demand had a threat of a license revocation attached to it, but it doesn’t appear that IPI has been ordered to get out of town. It has, however, pleaded its case and said that it can cover the tens of millions of dollars it owes, but will need more time to come up with the cash.

IPI told a district court judge this week that it can pay the sanctions levied by the courts and the Commonwealth Casino Commission (CCC), and company lawyer Michael Dotts has asked the judge to delay the process that could yank the license. He asserted, “I am also advised that IPI’s parent company has successfully raised funds and that it is only a matter of time before IPI has the ability to come current on all sanctions. I have not been told how much time.”

However, the judge, Chief Judge Ramona V. Manglona, replied that it isn’t up to the courts to make the decision on whether or not to revoke the license. That lies squarely with the CCC, which could still take action against IPI for not complying with its order. The issues, though, don’t stop there.

IPI was on the hook for $5.65 million to a contractor, Pacific Rim Land Development, who had done work on the Imperial Palace. However, IPI tried to back out of paying its bills, arguing that the amount requested was more than it should have to pay. This led to a separate lawsuit against the company that has now run its course. IPI had been given ample time to respond to the lawsuit but decided it didn’t need to waste its time. A writ that was issued last month to seize funds to pay Pacific Rim never received a response from IPI, so Manglona has given permission for the US Marshals to hand over $1.38 million from money seized from an IPI account at the Bank of Saipan.

That’s just the beginning. In a separate case, which also has found IPI eerily silent, the company has been sued by several former workers. They want over $11 million in total, yet Manglona was forced to intervene after IPI was determined to have continuously ignored court deadlines without so much as a whisper of acknowledgment. She has issued a default judgment in favor of the workers, adding, “[IPI] has walked back from the stipulations it agreed to in January 2020. It has provided confusing and contradicting information to both plaintiffs and the court. It argues financial distress but provides no documentation of its financial health. It has changed counsel several times during this period and was warned by the court each time that such changes could negatively impact its ability to meet its discovery obligations.”

IPI’s brass can only be compared to the Keystone Cops from a century ago, and are apparently mentally living in the same period. They have misrepresented Imperial Palace from the start, been accused of bribery and nepotism, missed payments and construction deadlines, put workers’ safety at risk and have never been able to show any legitimate progress with the casino or with its ability to operate as a respectable company. IPI was given a certain timeframe to complete different phases of the casino, and it has missed each of the deadlines. Now, it wants to shift the schedule once again, pushing the launch of the gaming facility to February 28, 2022 – a full year after its most recent delay. In addition, it wants another two years for the completion of Phase 1 of the project, which would put the anticipated launch date as August 13, 2025. Phase 2 would then be delayed two years to August 13, 2030.

If that weren’t enough to cause the CCC to take action once and for all, IPI also wants to have its license fees and other obligations reduced by up to 50%. It has also been unable to come up with the three months’ worth of payroll it was ordered to maintain. At this point, the best course of action would be for the CCC to take IPI completely out of the picture, seizing all assets tied to the Imperial Palace to cover the massive outstanding debt. Then, it can sell those assets to a company that actually knows what it’s doing and won’t continue to provide embarrassment to the CNMI government or its people.