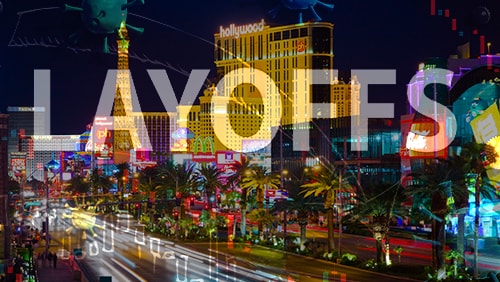 The casino industry had hoped for a quick recovery from the coronavirus pandemic that forced the majority of them to shut down temporarily. With those closures came an endless string of temporary layoffs and furloughs for staff, with no shortage of promises that these suspensions in employment would be brief. It now appears that there will be plenty of casino workers whose suspensions become more permanent, as a number of casinos along the Las Vegas Strip have informed regulators that they are going to have to permanently let employees go.

Per federal law, most businesses that have 100 employees or more have to notify their respective state’s designated body at least two months in advance of any termination of employment. That was ordered through the Worker Adjustment and Retraining Notification Act (WARN) of 1988 and, in Nevada, the Department of Employment, Training and Rehabilitation (DETR), through its Employment Security Division, manages the processing of notifications. Since June, the number of notifications received by the office from the local casino market has increased.

So far, according to DETR, the Sahara, Treasure Island, M Resort and Trump International – a hotel with no casino – have filed what have become known as “WARNings,” the notifications required by WARN, since June. Penn National Gaming and MMG Resorts have also filed WARNings and, in Reno, Harrah’s Reno and Peppermill Resort Hotel Casino are looking at reducing their staffing levels, as well.

Across the US, the unemployment rate has improved and now stands at around 11.1% following two solid months of additional jobs being added. In May, 2.5 million jobs were recovered and, in June, 4.8 million were added. Specifically, in the hospitality sector, June saw a total of 3.6 million jobs recovered between hospitality and leisure activities (such as bars and restaurants). However, in Nevada, as of the end of May, the unemployment rate stood at 25.3%; the new WARNings don’t paint a nice picture for that rate to be reduced.

Since Nevada took its first sucker punch from COVID-19 in March, the state has seen around 528,000 unemployment claims filed. For the last full week of June, there were 11,110 filings, according to DETR, which was an increase over the previous couple of weeks. Over the next couple of months, the department needs to be ready to see even more filings.