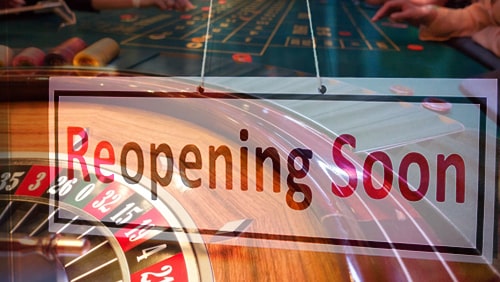 The jury is still out on when casinos in Massachusetts will be able to reopen their doors to patrons. Many states across the US have already begun to welcome visitors again, while adhering to stringent health and social distancing protocols, but Massachusetts isn’t there yet. In fact, according to the most recent data from the Massachusetts Gaming Commission (MGC), the state may not be ready until the end of the month, at the earliest. The continued shutdown is going to make it more difficult for the casinos, and the state, to begin recovering from the coronavirus pandemic.

Local media reports that June 29 is the earliest that Encore Boston Harbor could get back in action, according to the Wynn Resorts property’s management. This could be pushed back even further, as the MGC has yet to approve a policy to allow the gambling houses to reopen. Once the policy is in place, Encore and the state’s two other casinos, the MGM Springfield and Plainridge Park, have said they need at least two weeks to implement whatever guidance is included by the MGC. However, that guidance has not yet been passed down.

The revelations were made yesterday as the MGC held a public meeting to go over the plans for casinos to resume operations with Massachusetts almost ready to move into Phase 3 of its recovery scheme. The state just moved into Phase 2 this past Monday, and each phase is expected to be in place for a couple of weeks before the next is initiated.

With that in mind, the casinos have a lot of work to do. They have to present to the MGC their own plans for how they will respond to the state-driven protocols and must cover “the steps and measures the licensee will take to achieve compliance with the guidance and protocols issued by the Centers for Disease Control [and Prevention] (CDC), the Massachusetts Department of Health (DPH), Governor [Charlie] Baker’s orders, and the Guidelines ultimately adopted by the Commission.” Those plans have to be presented at least a week before the venues are allowed to reopen, or there might be possible delays.

The MGC isn’t releasing its guidelines until it clarifies a few points with the state. Some of the mandatory social distancing guidelines haven’t yet been fully understood by the commission and it wants to make sure it conducts its business in accordance with the law. Some of the solutions to be imposed are common sense, but the MGC is prepared to lean heavily toward too much compliance, instead of just squeaking by. According to MGC commissioner Enrique Zuniga, “What we are trying to do is to layer as many provisions as are feasible in order to minimize the overall risk. We are not going to bring down the risk to zero. Let’s face it. That’s true for every other industry. What we are left with is the workability of each precaution.”