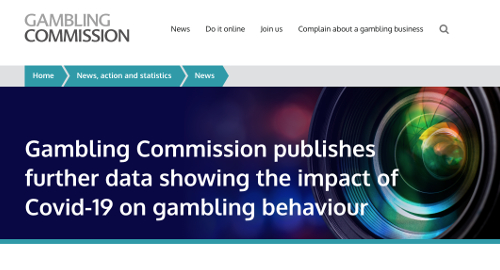 UK gambling activity has remained relatively flat during the COVID-19 pandemic lockdown, according to new stats by the UK Gambling Commission (UKGC).

On Friday, the UKGC released new data on COVID-19’s impact on gambling behavior, which showed that 75% of recent gamblers – defined as individuals who engaged in some form of gambling activity over the past four weeks – hadn’t increased time or money spent gambling in April, the first full month in which the nation was under pandemic restrictions.

What’s more, YouGov research showed that around 2% of UK adults stopped gambling during the past four weeks compared to just 0.2% who started gambling for the first time during the same period.

Online slots, which anti-gambling campaigners have fingered as the primary pandemic villain, reported a 25% active player rise in March 2020 compared to the same month last year, but this number fell 2% between March and April. Other casino games rose 5% month-to-month, while virtual betting rose 44% and poker jumped 53%.

Poker also recorded the biggest rise in total number of bets placed per vertical with 70%. Virtual betting gained a comparatively modest 37%, while the gains were even more modest for other casino games (25%) and slots (15%).

A higher number of consumers (42%) engaged in more than one gambling activity in April, up from 26% in the same month last year. Around one-third of recent gamblers tried a new product during the lockdown, although the most popular new activity was National Lottery draw products.

All told, the numbers largely mirror the UKGC’s previous report, which found that the small ranks of so-called ‘engaged’ gamblers were largely responsible for overall activity increases. However, the UKGC stated that this was sufficient justification for pressuring operators to boost their monitoring of player activity to ensure these engaged gamblers don’t suffer harm from pandemic boredom.