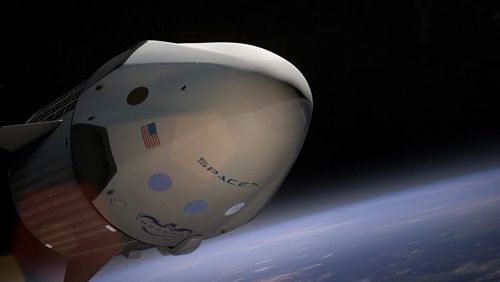 Mother Nature tried to get in the way, but NASA ultimately prevailed. After being delayed due to bad weather, Crew Dragon, the space shuttle created by SpaceX, lifted off Saturday from Kennedy Space Center in Florida and connected with the International Space Station (ISS) yesterday. Astronauts Robert Behnken and Douglas Hurley will now go down in history as the first two astronauts to fly a commercially-built space shuttle to the ISS.

Crew Dragon lifted off at 3:22 Eastern Time Saturday, delayed by three days due to bad weather. It docked yesterday at approximately 11:22 AM, after which Hurley stated, “It’s obviously been our honor to just be a small part of this. We have to give credit to SpaceX, the commercial crew program, and of course NASA. It’s great to get the United States back in the crew launch business and we’re just really glad to be on board this magnificent complex.” Behnken added, “…[The] Dragon is a slick vehicle and we had good airflow, so we had an excellent evening and just excited to be back in lower Earth orbit again.”

The last time US astronauts headed into outer space on US-made spaceships was in 2011. That was when the last NASA Space Shuttle mission was flown with Atlantis on July 21 that year, bringing to an end 30 years of the organization’s Space Shuttle program. SpaceX, also known as Space Exploration Technologies Corp., was founded by Elon Musk in 2002 and looks to make outer space travel a commercial activity.

Because of the launch of the space program some 60 years ago, consumers today have a lot to be thankful for. Most people may not realize that the tiny cameras they use daily to take selfies are a product of NASA. Jet Propulsion Laboratories, a part of NASA, was tasked with creating a camera in the 90s that would be small enough to be used on a spacecraft, but with superior resolution. Today, about 1/3 of all cameras use the technology created by the group.

Many of the sneakers used in sports today can be traced back to NASA, as well. A former engineer with the agency was involved in developing technology for flight suits, and that same technology led to the creation of the lightweight athletic shoes used today. Have a “Dustbuster” that you use to vacuum the car or sofa? Black & Decker built the first Dustbuster for NASA so it could suck up samples on the moon.

Video gamers can thank NASA directly for two pieces of technology they couldn’t live without. Wireless headsets were created so astronauts could become disentangled from all the cables and wires previously needed in order to communicate. At the same time, in the mid-60s, a researcher at the agency wanted to come up with a way for computers to be more interactive and user-friendly. The result is something everyone takes for granted today – the computer mouse. So much for the idea that NASA was only responsible for bringing us Tang.