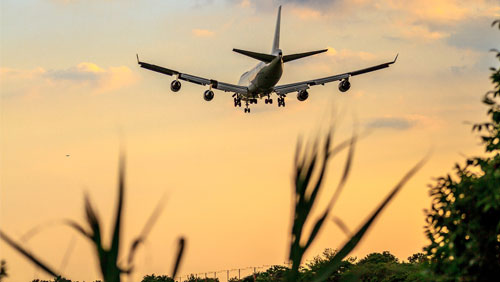 Passing through a massive full-body scanner at an airport or other public facility is something that has been often seen in sci-fi movies, but the idea may not be as much of a fantasy as it currently seems to be. The coronavirus pandemic is causing a paradigm shift in how air travel

is managed, with the global airline industry not wanting to suffer through another massive shutdown like what has been seen this year. In select airports around the world, thermal body scanners are being used on every passenger passing through the corridors and terminals, and it’s quite possible that, going forward, this will be the accepted practice at all airports going forward.

Currently, traveling through an airport is somewhat of a chore – flyers have to take off all their jewelry, belts and shoes (in some cases), they have to take their laptops out of their bags and wait in long lines to pass through either an X-ray machine that has been used for decades or a newer “millimeter wave” machine that can check for virtually anything, including suspicious items. It’s a time-intensive process that has led to more than one person missing a flight.

However, it’s also a necessary process to ensure the safety of all passengers – just like checking temperatures. Thermal imaging cameras are being deployed that can automatically scan everyone as they pass in front, looking for any sign of a fever. It’s inevitable that both of these scanners will ultimately be combined into one solution, and could even be implemented to facilitate faster security checks, which would make everyone happy.

It would certainly make airlines happy. British Airways, one of the world’s largest, has had to cut 12,000 jobs just to stay afloat. Virgin Atlantic owner Sir Richard Branson has had to sell assets owned by his conglomeration of companies to avoid bankruptcy. American Airlines reported a net income loss of $2.24 billion for the first quarter of the year, and analysts have started to express concerns that the company may soon be out of business. Collectively, airlines, airports, federal aviation departments across the globe could combine their resources to see wider installation of body scanners that can check for everything from traces of drugs to firearms to even abnormal body temperatures, helping to ensure there isn’t another catastrophic shutdown of travel.

From Singapore to London, thermal body scanners are now being used and this is undoubtedly just the beginning. Soon, being able to walk through a tunnel 15 feet long as every inch of the body is scanned for something out of the ordinary may be as common as driverless vehicles are becoming.

Ten years in the digital trenches: life as a CalvinAyre.com writer
Steven Stradbrooke
20 May 2020