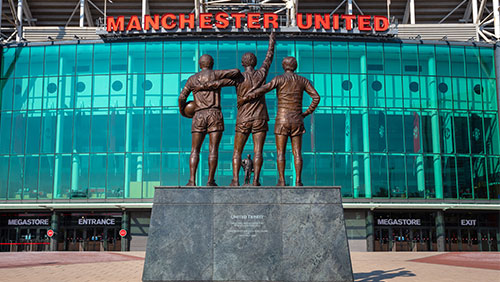 It is seven years since Manchester United last won the English Premier League title, and they haven’t got close since. In terms of points, the 81 points they took in 2017/18 has been the best they’ve done since, when they finished 19 points off the top.

The 2012/13 season was Sir Alex Ferguson’s final season in charge of the Red Devils, and he led United into the season on the back of one of the most dramatic signings the club had made in Ferguson’s 28 years at the club’s helm.

In pinching Robin Van Persie from Arsenal, United had arguably the best two strikers in the league, with Wayne Rooney fast on his way to becoming United’s record goalscorer. United had lost the previous league title on goal difference with both United and City accumulating 89 points. While many would refer to the changes made at Old Trafford signaling a final flourish for Fergie’s team, United only maintained that level, taking 89 points again, scoring the exact-same number of goals, just conceding 10 more. That defensive dip was to hint at the years to come, but back in the pre-season period, it was all about integrating Van Persie into the side.

One of the biggest problems in previous years, certainly the 2011/12 season, was United’s inability to start the season well. That looked set to continue when they suffered a 1-0 defeat to Everton on the opening weekend, but four successive wins, including a 2-1 victory against Liverpool at Anfield helped calmed some of the nerves, with Van Persie proving the clutch forward at the death as 10-man Liverpool first led then lost.

United sat ominously in second place after that victory, but another defeat, this time at home to Tottenham Hotspur, put the skids on any progress, with two defeats in the opening six games seeing United lose ground. It took another stretch of successive victories to put them back in contention, a win which included two more close wins against challengers from the ‘Big Six’, a 3-2 win at Chelsea followed a week later by three points at home to Arsenal which put the Red Devils top, where Van Persie scored against, this time against his old club.

Last-minute victories were keeping United alive, with a late winner from Javier Hernandez against Aston Villa at Villa Park maintaining United’s challenge, keeping them at the top of the league. A blip away to Norwich on November 17th saw a 1-0 defeat temporarily drop United to second place, but it would be the last league defeat for five months.

United swept aside many opponents along the way in that run, but the most important result was easily the 3-2 victory at the City of Manchester Stadium. Having led 2-0, United were pegged back, only to win it with a last-gasp Robin Van Persie free-kick that sent the red half of united into ecstasy.

The previous season had seen City win both clashes between the two teams, and the difference was huge. United would remain on top of the table for the rest of the season, eventually winning the championship by 11 points from their cross-city rivals. Another win against Liverpool saw Ferguson’s men do the league double against the bitterest rivals of his tenure in the Old Trafford dugout, and while Manchester City won the reverse derby 2-1 at Old Trafford, it was nowhere near enough. United had cantered to the title by the time Ferguson announced his retirement at the start of May, and United had just two games remaining.

In the final game of Sir Alex Ferguson’s Premier League winning campaign, United drew 5-5 at West Bromwich Albion, a fitting testament to the swashbuckling football of the Ferguson era, football many might argue has never been replicated and likely won’t be any time soon, by any team.

In the Champions League, United were eliminated by Real Madrid, for whom Cristiano Ronaldo both starred and scored, as a red card for Nani saw United go from leading on aggregate to out in a matter of minutes. But at home, Ferguson proved himself the master and although United were beaten in both the EFL Cup and F.A. Cup competitions by Chelsea, it would be in the league where United were remembered as the best, in one of the best triumphs Ferguson ever accomplished. It remains the most recent time United have been domestic champions.