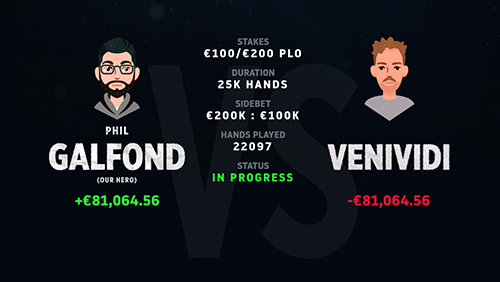 At one point in his first Galfond Challenge, Phil Galfond was €900,000 in the hole. He took a few days off, he weighed up his play against his luck. He answered many calls from fans and rivals on Twitter for him to hang up his mouse, admit defeat and take the L with the good humour and grace that he had been credited for so much in the past.

Many of those messages either declared outright or hinted at the same kindly yet cutting opinion on the Run It Once supremo.

‘You used to be great, but this guy is too good for you’, they spoke as a crowd-voice.

Reluctant to let the voice drown out his own thoughts, Galfond took time out in the tank. He processed his play, looked at how many hands he had left to recover the deficit and came to a decision. He was going to play on, to battle for the win when almost a seven-figure sum down.

Almost a million euros of make-up later, Phil Galfond has taken the lead in the Galfond Challenge, ending the 35th session of play against VeniVidi ahead overall at the end of the session by an incredible €81,064.56.

So far, 22,097 hands have been played, so just under 300 are left to play. As things stand, Galfond will be a big favourite to end up ahead, and indeed his fans are in overdrive about his potential victory in the series which would be worth whatever he ends up ahead plus the €100,000 side-bet that VeniVidi put up against Galfond’s €200,000.

Galfond himself, however, has moved to temper the excitement and remind everyone that with crazy swings in Pot Limit Omaha, he still has plenty of preparation to put in.

I really, truly appreciate all the congratulations on the #GalfondChallenge comeback, but there won’t be any celebrating over here – I’ve got work to do.

3k hands left to play, and my job is to play them better than the last 22k.

The odds for Galfond to win have tumbled on Poker Shares in the last 12-24 hours, with Galfond now the favourite to win. From being a massive outsider, Galfond now sits at 1.37, with his adversary, who was up €900,000 just a few weeks ago, now available at 3.20.

Odds for the other Galfond Challenges have moved, too. Galfond is as short as 1.17 to beat Chance Kornuth (5.25) in their battle, while the Run It Once boss is 1.68 to be victorious against Dan ‘Junlgeman’ Cates, who is available at 2.24. With Galfond also a 1.57 favourite to edge out Brandon Adams (2.48) too, only ‘ActionFreak’ (1.73) is a running favourite to beat Galfond in their challenge, with Galfond an outsider at 2.15.

The €100/€200 PLO challenge against the player known as ‘Venividi1993’ online, but whose name has been minimized to omit the suspected birthyear, has captured the imagination of poker fans starved of live tournaments for close to a month now. With upcoming online tournaments aplenty, however, fans will have chances to put their PLO skills to good use in events such as several in the Irish Open, running now on partypoker.

With the latest session comprising of 758 hands, Galfond winning €121,486.95 over the session itself and wiping out the €40,000 he was down by overnight, the latest thrilling session can be viewed as a replay on Twitch right here.