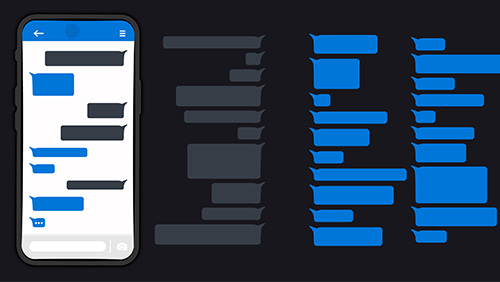 As I was slowly making my way out of customer service operations, one of the biggest initiatives we were taking on was increasing automation, with a goal of rolling out chatbots in the next couple of years. The technology was finally getting to the point where a reliable solution could be implemented, and customers might not mind that they weren’t talking to a real live person.

Getting started on automation

In our eyes, the advantages of implementing automation were clear. We could deliver the same level of customer service, handle a higher volume of customer contacts, while reducing costs and reducing front line recruitment and training needs.

But implementing automation, in a company that had no history of automating anything and very little skill to apply to the task, was a daunting proposition. We felt our staff would fight back against the robots, for the fear that they would eventually lose their job.

The plain truth was that we wanted to use automation to help make our agents better, not replace them. Sure, maybe we wouldn’t need as many agents a few years down the road, but natural attrition would take care of that. We weren’t planning to pursue massive layoffs or anything.

Getting staff on board

To get a better idea of how an operations leadership can pursue automation, while getting staff on board, I reached out to Minter Dial, author, and expert on matters of customer service, leadership and artificial intelligence. “The main pitfall of implementing automation seems to be in the misunderstanding or misalignment of the cultural fit within the company,” he told me. “A company that is not known for great customer service will not be able to magically create a fabulous customer experience thanks to automation. A business that wants its chatbots to be empathic, but doesn’t have an internal culture that is genuinely empathic, will not be well equipped to programme an ethical and empathic bot. Leaders need to be more forthright about what they are trying to achieve. For example, if a leader believes that automation is going to help reduce costs, but talks about it as a way to improve customer service, there will be more mishaps.”

An example Dial provided of a company that has achieved success in implementing automation is KLM, who have employed Digital Genius AI. “The key was that they focused on making the customer service agents’ role more valuable.”

Dial gave us three important points to keep in mind, to keep both the customer and existing staff on board. “First, a company needs to make sure that they are being transparent with customers when they are interacting with a bot rather than a human being. Secondly, the company wishing to implement automation effectively should include the concerned front line employees upfront in the development. Thirdly, the ensuing development and integration should be about enhancing the customer experience, focusing on the employees’ ability to add value into the experience, and to improve the employee’s own sense of fulfilment.”

The last point is one we pursued, but maybe not as well as we could if we had Dial giving us tips. We planned for automation to remove the most trivial but time consuming pieces of an agent’s routine so they could focus on more fulfilling and important tasks. Our problem was, without a clear vision of what those fulfilling task would be, our agents were mired in the day to day of their current obligations.

Switching operations over to chatbots

We didn’t get to implementing chatbots when I was still in operations, but that was the clear end goal. We were seeing them succeed in other industries, and we knew we could make it work for gambling. We had no fears that handing control over to these bots would be like Skynet waking up on Judgement Day.

Most customers preferred chat as their interaction method, choosing it over picking up the phone or sending an email. The majority of their concerns could be answered quickly and efficiently, and there’s no annoying hold music to listen to while you wait for an answer.

But the downsides were also clear. To handle the volume of chats, agents were handling several chats a piece, and errors were common enough. We advocated that agents should use our programmed, scripted responses to save time and cut down on errors, but we quickly found out that some agents would use the wrong scripts, or write their own, causing more errors.

Dial told us that many customers are indicating they prefer the ruthless efficiency of a programmed chatbot over an agent. “It’s not unheard of that some human beings are less good (less well perceived) than the machine,” Dial said. “To wit, a study last year showed that 64% people (in 10 countries) tend to trust more a machine than their manager.”

Chatbots are already at the point where, for the majority of player concerns, they perform quite adequately. First and second level concerns can be coded out using work flows, processes and conversation trees.

But they aren’t perfect yet, and an agent at the helm will always be necessary. “It’s extremely difficult to anticipate all the possible avenues that a customer might go down without managing the handoff with a human agent,” Dial noted. “Some bots have shown great promise, but for now, it’s important to establish the handoff criteria and work flow/process.”

Dial emphasized that chatbots can be equipped to handle the bulk of contacts, and there is promising technology that, once implemented, could equip them to handle much more. But they are nowhere near perfect yet. “Chatbots that are well programmed can do early triage of incoming requests very efficiently and answer simple questions,” he said. “But most chatbots are still rather rudimentary. They are typically lacking an ability to navigate anything beyond a simple ‘conversation.’ Yet, there is hope when you take the example of Google Duplex AI in the way it handled a hairdresser rendez-vous request. It takes a lot of data, robust learning sets and a defined and contained context to programme a bot well.”

While we never got close to picking a chatbot, Dial had some suggestions for those who might soon have to. Mitsuku was his pick, based on its conversational abilities.

As the technology improves, expect to see more chatbots on gambling sites, and all manner of websites, really. The efficiency they bring to an organization is undeniable, and paired with a well-trained agent, they can handle just about any player concern. If you’re in operations and haven’t considered implementing a chatbot, the question you need to ask yourself is, why?