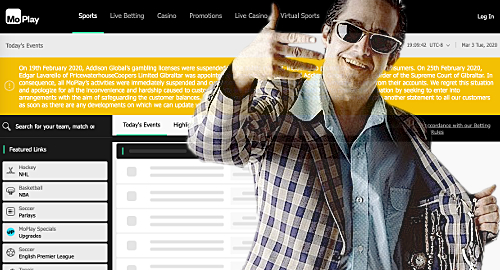 The parent company of defunct online gambling site MoPlay is reportedly flogging its customer database in the hope of garnering enough money to reunite those customers with at least some of their account deposits.

On February 19, MoPlay’s parent company Addison Global Ltd had its gaming licenses suspended by regulators in Gibraltar and the UK after a key investor pulled his financial support, apparently leaving the company without the wherewithal to carry on operations.

MoPlay customers were originally told that the site was no longer taking any new wagers but days later were greeted with a message informing them that “due to financial difficulties, we are unable to process withdrawals.”

The message ominously warned customers to check their T&C’s regarding the fate of their funds in the event of insolvency. The applicable clause warned customers that “your funds would not be considered separate to the other company assets and you may not receive all your funds back.”

MoPlay has since alerted customers that on February 25, Edgar Lavarello of PricewaterhouseCoopers Gibraltar had been appointed the Provisional Liquidator of Addison Global by order of the Supreme Court of Gibraltar.

This latest message went on to say that the company was “presently exploring possibilities to resolve this situation by seeking to enter into arrangements with the aim of safeguarding the customer balances.” The company said it would keep customers in the loop regarding any developments.

On Tuesday, eGaming Review reported that Addison Global’s liquidators were looking to flog the company’s player database to raise cash with which to pay off its debts – although, given the rumors floating around about the company’s liabilities, debts owed to rank-and-file customers may yet go unpaid.

Racing Post reported that UK bookmaker Star Sports was among the companies believed to be sniffing around the Addison database. Whoever emerges from this scrum with the database in their teeth — assuming someone actually bites — it remains to be seen if they’d be willing to make MoPlay’s customers whole.