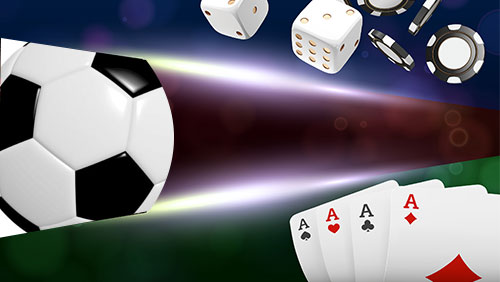 Last week we brought you several British poker players who used to be footballers. This week we focus on five men from Europe who swapped the pitch for the felt and turned their attentions from balls to chips in the pursuit of glory. Of all the footballers you might pick for a poker career after football, it probably wasn’t the wispy winger Tomas Brolin. But then, by the time he reached the poker table Tomas Brolin was no longer as wispy and floaty as he once was when darting through the England defence for Sweden and – for 13 games at least – Crystal Palace.

Tomas Brolin the poker player began his love affair with the game in the World Cup year of 2006 when he took part in Football & Poker Legends. From his results of 2nd, 4th and 3rd in that event, he moved on to playing the World Series of Poker. It was on the European Poker Tour that he had his greatest time in the sun, however, when he came 23rd in the EPT Main Event at Season 4’s Prague stop. Brolin then followed that result up with a 38th-place finish in the season-ending Grand Final Main Event in Monte Carlo, those two cashes alone earning him over €50,000. Silky.

As aspirational players go, few poker fans aim higher than the life of Gerard Pique, the central defender for Barcelona and other half of Shakira enjoying life so much he decided to buy up the ATP Cup and transform it under his guidance.

At least poker players could look at Pique and know they’d cashed for more at the poker table than him. That was, until his runner-up performance at the 2019 EPT Barcelona Single-Day High Roller earned him a massive €352,950. Having cashed five times across eight seasons of the European Poker Tour in his home town, Pique lost to countryman Juan Pardo in that event, which also featured another F.C. Barcelona player, Arturo Vidal, who finished fifth in the same event.

Some footballers-turned-poker-players are more natural at the table than they ever were on the pitch, and Danish player Jan Vang Sørensen is one good example of that. Sorensen may have played for Odense, but at the age of 30, he was forced to retire after a knee injury called time on his professional football career.

Turning to poker was the best thing to happen to Sorensen, as he proved himself dab hand at the felt. To date, Sorensen has 12 money finishes on the WSOP and has won two World Series of Poker bracelets, specialising in seven card stud. He’s also made quite the impression on the World Poker Tour too.

Former Liverpool stalwart Jan Molby has only got two cashes on the Hendon Mob in official ranking tournaments, but one is a 45th place finish at the EPT Main Event in his native Copenhagen, with the other being a victory in Liverpool in a Red Diamonds event.

Molby has also played online poker and is one for the numbers, at least stemming back to his football career. Of his 62 goals for Liverpool, the Danish legend scored 42 of them from the penalty spot.

Once a free-kick specialist for Liverpool, Norwegian defender John Arne Riise always had something of a reputation as a party boy. So it probably isn’t much of a surprise to learn that he loves a bit of poker.

While Riise is yet to embrace the dedication required to be a long-term success at the game, he came 2nd in the €550-entry 2017 JP Masters event in Dublin for €17,470, only losing heads-up to German player Bjorn Geissert. Impressive.