It’s the first of two weekends during the midwinter English Premier League break, and if you’re wondering why you still have EPL football to watch, then we can help. The fixtures have been staggered, essentially, so that there are not too many days without live football, but players still get around a fortnight off each. We’ve put together a guide of exactly how it all works for you, but the fixtures we do have to look forward to this weekend are going to be good. Possibly really good. Let’s take a look at them in a bit more detail. 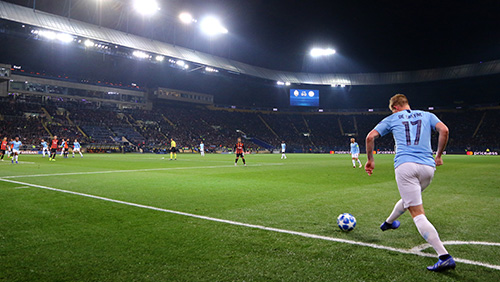 The first match to kick off this weekend is the Yannick Bolasie derby. Or the James Vaughan derby. Or the James McCarthy derby. Look, the point is, these two teams love to trade players, gossip, and rumour has it that the Crystal Palace eagle lives on toffees alone. From a failed summer bid for Wilfred Zaha by Everton to a successful loan bid by Crystal Palace for Turkish striker Cenk Tosun, these two sides have plenty of previous and will go into battle on Saturday lunchtime determined to come out on top.

The two sides are closer in the table that it might look at first glance, too. Everton are five places higher than their South London rivals in 9th place to The Eagles’ 14th-place situation. But the gap is actually only three points, and such is the goal difference that an away win would see Palace leapfrog Everton in the table.

Under Carlo Ancelotti, Everton look a much better side than they did earlier in the season, and a victory for The Toffees would put them a point behind Spurs, and just five points behind Chelsea in the Champions League places. With The Blues not playing until Monday Night Football on February 17th sees the West London side host fellow top four challengers Manchester United, all the chasing pack have a move up the table in their sights.

A battle between the haves and have-nots sees the current Premier League champions – for a limited time only – host a side who look like they will be fighting against relegation until the last day of the season.

On the face of it, The Citizens should wipe the floor with the team currently situated in 18th place, the worst position in the whole league and one that if The Hammers remain there will relegate them to The Championship. Manchester City are the current top scorers in the Premier League, have Sergio Aguero fit again and will be attacking a West Ham defence that shipped three goals to Brighton in their last match.

Football, however, rarely goes to plan, and that is especially the case in the Premier League. West Ham also scored three goals in their dramatic draw against the South Coast side of Brighton, and they have a track record of going to big sides and causing havoc. If they go with Michail Antonio, then they can cause the porous Citizens defence some serious problems, with Pep Guardiola’s side letting plenty of goals in recently.

While the home side should win, it could be a to-and-from game and the handicap market is one to avoid. Goals, however, should be easy to come by.