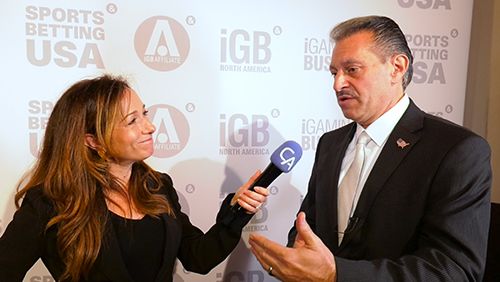 New York legislators are doing their best to make mobile sports betting a reality in the state, so money that’s already going to sports books can stay in the Empire State. We previously heard from J. Gary Pretlow on the topic, and joining him is State Senator Joseph Addabbo Jr, who spoke with our Becky Liggero Fontana on the topic.

The big problem right now is that, to conveniently bet on sports, you can either go upstate, or across the border. “So right now you are in New York City and if you were to place a bet, Becky, you would have to get in your car, drive 2 hours north, that would be the closest one, where you would have to place a bet, sports betting bet, in person at one of our lounges,” he said. “And that’s unfortunate, because at the same point that we’re at, New York City, you’d get in a cab, and in about 20 minutes, you could be in New Jersey placing a bet on your phone. And that’s the problem we have in New York, that we’re losing a lot of our revenue to New Jersey, who’s doing very well with this. So the idea here is, how do we stop that flow of revenue out of our state, keep it here, increase educational funding, because a portion of our proceeds do go to education, it’s about doing the right thing by mobile sports betting here in our state.”

That difference in convenience means a huge gap in revenue. “So, this pains me Becky, but you know, we looked at the numbers for September in our state, and our four lounges, even after the football season started, did $2.3 million,” he noted. “And that’s unrecognized revenue, we never had that before, so we appreciate that, we expect the numbers to grow, and we hope it does grow. But then you look at the same period, that September month in New Jersey, and just looking at their sports betting, which is mobile sports betting, which is about 80% of what they do in New Jersey, is about 80% mobile sports betting, they did $38 million. They did $38 million, we did $2.3 million. And of that $38 million, if you think 25% of that money is our New Yorkers going to New Jersey, that means that $9 million is really our money going there that could have been here.”

Addabbo and Pretlow agree, this can change. “We can do mobile sports betting in our state,” he said. “And we just try to convince the governor and the Speaker and even my house to the senate that this is the way to go. If you want revenue, want to increase educational funding and the jobs that are associated with it. So I think that this is a good argument to make.”

Abbaddo has worked on a bill, with the help of the industry, and it’s been a bit of a process. “Gaming industry is very important to us, because they give us the momentum we need,” he said. “They reach out to our governor saying ‘Hey, we really could do this right, we could protect the problematic gaming issue, we could do this,’ and it gives us the momentum, it really does give us the momentum. My bill passed the Senate this year, it was a diversion, which means that they would change. We amended it four times, and why would we do that? Because we kept hearing the industry on how we can make our bill better. And giving that input was important to us, so we got a bill that we’re very proud of, I think it’s a solid bill, and we’re going to go forward with it, and we hope to put it actually in the budget where it should be, it’s a fiscal issue so it should be in the budget.