After three days of action in the partypoker Caribbean Poker Party event, Day 1a, Day 1b and Day 2, just 135 players remain from the 948 total entries (125 from the live felt and 10 who made it through both Day 1 and Day 2 online) and it is Scott Margereson who is their chip leader in the Bahamas. 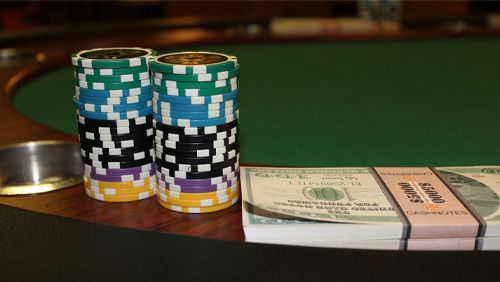 With a packed field of superstars aligning on Day 2, Margereson’s lead is all the more impressive considering who he had in front of him at the start of the day. German super high roller and poker end boss Philipp Gruissem started the day with over 12 million chips, some improvement on the million-chip starting stack that $10,000 buys you in this MILLIONS World event.

Gruissem would finish Day 2 on an impressive stack of over 24 million chips, but Margereson racked up 38,350,000 to lead the way after an amazing day at the felt. Using the bubble to his advantage, Margereson was able to make hay while the sun shone on him in Bahamas, with pressure applied to Brandon Sheils in a very late hand adding a vital 14 million chips to his leading stack by close of play.

Elsewhere, the bubble boy was Vasylenko Yevgen, who exited in 126th place when his micro stack was all-in with three-deuce. Called by Jacobus Visser, the board flirted with false hope for the unfortunate Yevgen when a flush draw appeared on the turn, but a ten on the river merely confirmed his exit and put every remaining player in the room, pausing the action for the night.

Day 2 saw 253 entries, adding to the 365 who had made it through from both starting flights, Day 1a and 1b. It took just over eight levels to reach the money, and when the dust settled, there were some big names bagging up chips.

While Margereson’s lead is impressive, he’s being chased down by some of poker’s top talents. As well as Gruissem, who sits second in chips, two others made it over the 20 million mark.

WSOP Main Event final table player Jorryt van Hoof bagged up 23 million chips exactly, and he was just ahead of Spanish crusher Sergi Reixach (22,875,000), who has enjoyed the best year of his poker career to date. Reixach and van Hoof will both be huge dangers to the chip leader on Day 3, but so too will Chris ‘Big Huni’ Hunichen, who is arguably the most in-form player to reach this stage.

Hunichen totalled 19 million chips by the time the dealers were asking players to write their names clearly and in capitals. Chino Rheem (18 million) and Sam Soverel (15 million) also made top 10 stacks by the end of the day.

It should be some finish to the tournament, with huge money up top.