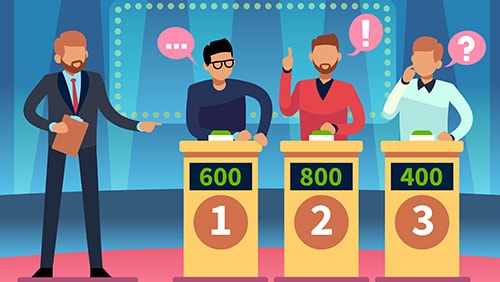 In a final which will have surprised no-one who has seen him play the game before, James Holzhauer took down the Jeopardy! Tournament of Champions on Friday, and in doing so, won a massive $250,000 in the process.

We’re surprised more poker players don’t target game shows as a kickoff to their careers. It’s a nice way of building the bankroll and can often attract a kind of notoriety of its own. Of course, this can be positive (Father Andrew Trapp on PokerStars’ Million Dollar Challenge) or negative (Liv Boeree on Goldenballs) but fame is fame, and there’s no such thing as bad PR, as Prince Andrew will tell you after the weekend. Well, maybe.

James Holzhauer, who has previously played online poker for something of a living, targeted Jeopardy! as a game in which he could apply GTO (game theory optimal) strategy and watch it play out in his favour. To say that this decision met with success is a little like saying that the man who shot an arrow in the vague direction of King Harold in the Battle of Hastings ‘had his eye in’.

Based in Las Vegas, Holzhauer cuts quite a dash on the game show, often appearing as if he attaches a great deal of personal glee from every correct answer he gives, which if you’ve never seen the show before, is a lot. This guy landed on Mayfair and Park Lane every time he played Monopoly as a child, you just know it. Certainly his opponents in the final’s denouement, Francois Barcomb  and Emma Boettcher, knew it.

Holzhauer’s relentless correct answers saw them openly roll their eyes if his finger reached his buzzer by the end of the action, and his win was not so much a formality as a mathematical probability that came into focus like Will Hunting’s scribbles on the wall did shortly before he was asked to get on with mopping the floors.

The 35-year-old Holzhauer’s triumph saw him get revenge on the person who stopped his incredible 32-game winning streak during the regular series of Jeopardy!, Emma Boettcher. Boettcher, who denied Holzhauer’s run back in June, was made to look like just another mannequin on Friday night, however, as Holzhauer’s optimum idea of pursuing ‘Daily Doubles’ at the cost of anything else, saw him leapfrog her total and confirm a six-figure score of a quarter of a million dollars.

Holzhauer won $2.46 million in the regular series, only short of Ken Jennings’ total of $2.52 million, with Holzhauer achieving that total in less than half of the games that Jennings did. Jennings took 74 shows to win his millions, while Holzhauer was able to rack up almost that amount while looking like the same person who started the run.

Boettcher did win $100,000 for coming second while Barcomb took home $50,000, but that will surely all be blown on fresh sour grapes after Holzhauer’s victory left him grinning in the final interview. It’s worth keeping a close eye on the contestants who aren’t speaking during this hilarious piece of footage:

Want to relive the magic? Here's a recap of the #TournamentOfChampions finals, presented by @Consumer_Cell. pic.twitter.com/6OOEoBsfWj

With Holzhauer’s victory putting almost every other Jeopardy! winner’s achievements into a pale light by comparison, the young genius has become one of the most iconic game show winners in history, and also proved that America really does know how to create superstars out of virtually anything. Look at England, whose ‘major’ claim to fame was a man winning Who Wants to be a Millionaire? by waiting for his friend to cough when the correct answer was being read out by the presenter.

As if to add oil to an already flagrant bonfire, Holzhauer has even taken time out from his busy schedule of learning everything about everything to call out Jennings and another former Jeopardy! champion, Brad Rutter on social media.

Even the Golden Knights congratulated Holzhauer for his recent exploits.

Congrats @James_Holzhauer on the Tournament of Champions win!!!

All our dude does is win win win 🙌

You can watch the replay of the final across two episodes for just four more days right here, and we’d highly recommend that you do, because when James Holzhauer arrives at next year’s World Series of Poker in Las Vegas, you will want to remember his smile and, if you’re in an event with him, get all your facts right about whichever subject you choose as suitable for table talk.

He’s bound to know exactly what you’re talking about.