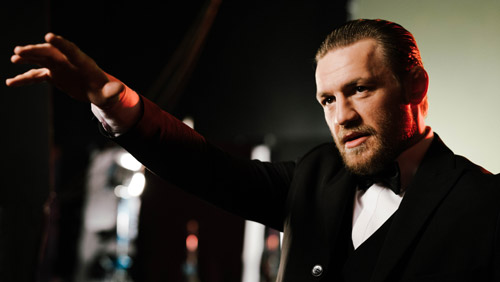 11 November 2019 – Parimatch, the international betting holding, has launched a new advertising campaign featuring cult athlete and brand ambassador Conor McGregor. The campaign, titled “A new epic story” features 15 action shots of Conor, which can be seen on billboards across the CIS region. McGregor also features in a short video, created by Canadian director Angelo Merten and French cameraman Charlie Bravo. The video can be viewed here:

Filming for the campaign lasted for three days, and took place in Dublin and Kyiv.

“It is impossible to put Conor’s personality into words, and also impossible to remain indifferent to him. In his advertising campaign for Parimatch he was true to himself – unpredictable and brutal, but always reliable and charged to win” said Parimatch CEO Sergey Portnov.

The new campaign comes hot on the heels of McGregor’s first trip to Ukraine in October, where Parimatch hosted a press conference in the MMA legend’s honour.

Parimatch is an international betting platform connecting emerging markets with the world of traditional and niche betting. Parimatch has over 1600 employees worldwide, supporting almost two million customers and covering more than 20 sports and 60 countries, 200 leagues and 600 sporting events every day. Headquartered in Cyprus, the brand has been established for over 25 years and is represented in different markets (Cyprus, Belarus, Russia, Kazakhstan, and Tanzania). The company is the official betting and wagering partner for the UFC in EMEA, with Conor McGregor and Mike Tyson as its official brand ambassadors. Parimatch also has sponsorship agreements with sporting institutions including Ukraine’s national football team, FC Apoel (Cyprus), FC Shakhtar (Ukraine) and Virtus Pro (e-Sports).