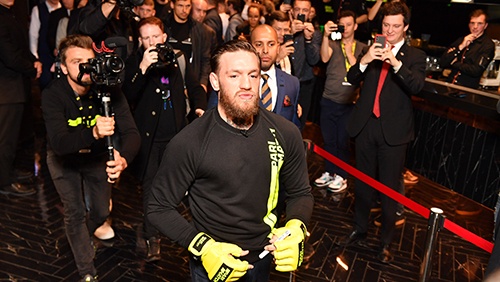 During a packed press conference, McGregor spoke candidly about the prospect of fighting the winner of the upcoming Jorge Masvidal v Nate Diaz bout, lessons learnt from his fight with Khabib Nurmagomedov, his whisky brand Proper Twelve as well as the importance of charity work.

Commenting on his first visit to the country, Conor McGregor said: “I am very happy to be in Ukraine. The first thing I noticed was the amount of Parimatch adverts at the airport and around the city with my face on them, which is really motivating. I chose to collaborate with Parimatch because they are ambitious and cool. Ukrainian sport, in particular boxing, is a global phenomenon. Fighters such as Lomachenko and Usyk are real stand out stars for me.”

Following the press conference, McGregor spent time meeting with children at a sporting tournament organised by Parimatch Foundation, a non-profit organization which delivers Parimatch’s corporate social responsibility (CSR) strategy. The Foundation funds and support charities and projects which improve children’s health and happiness through sport in the communities where Parimatch operates.

“Conor McGregor has been a key face of Parimatch since the beginning of the year.” commented Parimatch’s CEO Sergey Portnov. “He is an undisputed superstar in and out of the ring with a huge global fanbase and I am delighted that we have been able to bring him to Ukraine. Not only is he a megastar athlete, but also a savvy business man – a perfect example of how the same attributes are required in the sports arena as well as the business world. As one of the main patrons of sports in Ukraine, Parimatch seeks to inspire sports enthusiasts and amateurs, and what better way to do this than by bringing the fighting spirit of Conor McGregor to the people.”

Parimatch is an international betting platform connecting emerging markets with the world of traditional and niche betting. Parimatch has over 1600 employees worldwide, supporting almost two million customers and covering more than 20 sports and 60 countries, 200 leagues and 600 sporting events every day. Headquartered in Cyprus, the brand has been established for over 25 years and is represented in different markets (Cyprus, Belarus, Russia, Kazakhstan, and Tanzania). The company is the official betting and wagering partner for the UFC in EMEA and the brand has sponsorship agreements with sporting institutions including Ukraine’s national football team, FC Apoel (Cyprus), FC Shakhtar (Ukraine) and Virtus Pro (e-Sports).