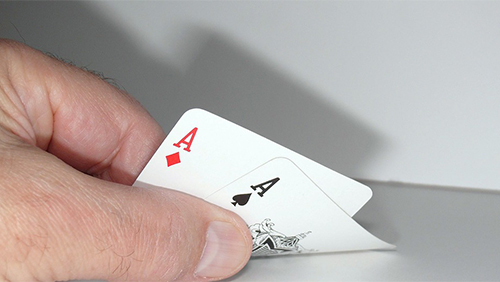 It’s been a week for live poker streams and hero plays, but some are more valid than others. For those of you who’ve been wading through the Mike Postle hands at Stones Live, you deserve a palate-cleanser. You deserve a hero and this week we found one in Garrett Adelstein.

In a superb hand broadcast on the daily stream at Live at the Bike, Adelstein made one of the sickest live folds you will see all year.

Before you watch the hand, it’s worth knowing a little about the hero in question. Garrent Adelstein is a former Survivor contestant. In a week that included news of Ronnie Bardah’s earliest of eliminations – Bardah busted first on the show – it’s worth noting that Adelstein departed in the second week. You might have got good odds on Jean-Robert Bellande outlasting both those two players, but he did.

In the poker world, Adelstein is a relatively small player in professional poker terms, having cashed just four times for just $171,874, but his most recent cash of  $49,108 did come for finishing 143rd in the 2016 World Series of Poker Main Event.

Cash games, however, are Adelstein’s bag. He’s been a regular at Live at the Bike since 2017, which is three years after he ended his stint as a poker coach on Phil Galfond’s Run It Once website. Hailing from Tucson, Arizona, Adelstein has entertained for years on Live at the Bike but may have saved his best-ever play for this week.

Taking part in the $50/$50/$100 cash game – we’re not talking $1/$3 right here, and there aren’t too many peaked caps and bowed heads on show – and his cash game powers are clearly genuine and frankly, wizard-like.

With another regular in the Bike game called Andy raising with the suited queen-ten, Adelstein came along for the ride with ten-seven off-suit, covering his opponent. Having check-called the 9-8-2 rainbow flop, Adelstein then check-raised the jack of diamonds on the turn from $475 to $2,600 and Andy made it $8,000. A call came from Adelstein.

It was on the river that the hand went from interesting to ‘shut the front door’ fantastic.

The five of hearts was a brick, but of course, both men had made straights on the turn, Adelsteins was just not good enough, with his opponent holding the nuts. Andy bet $14,500 and Adelstein went into the tank, emerging as if he had aged a year for every minute he’d been thinking.

Then he started talking.

Processing the hand aloud, he surprised even himself, it seemed. Could he really make the fold? Surely he couldn’t. But perhaps he could. Or could he?

You can watch exactly what Garret Adelstein did right here… and it’s worth every moment as the lines on his face tell the story and find the perfect ending.

In a week where RFI, morals, player testimonies, cardroom honesty and more have been questioned, it’s good to know that there are still heroes out there. They don’t wear capes and they can’t avoid hitting bullets – even if they hold kings – but sometimes, they make the call only a hero can make. We can all be more like Adelstein.