Home / Business / Preparing for a no deal Brexit 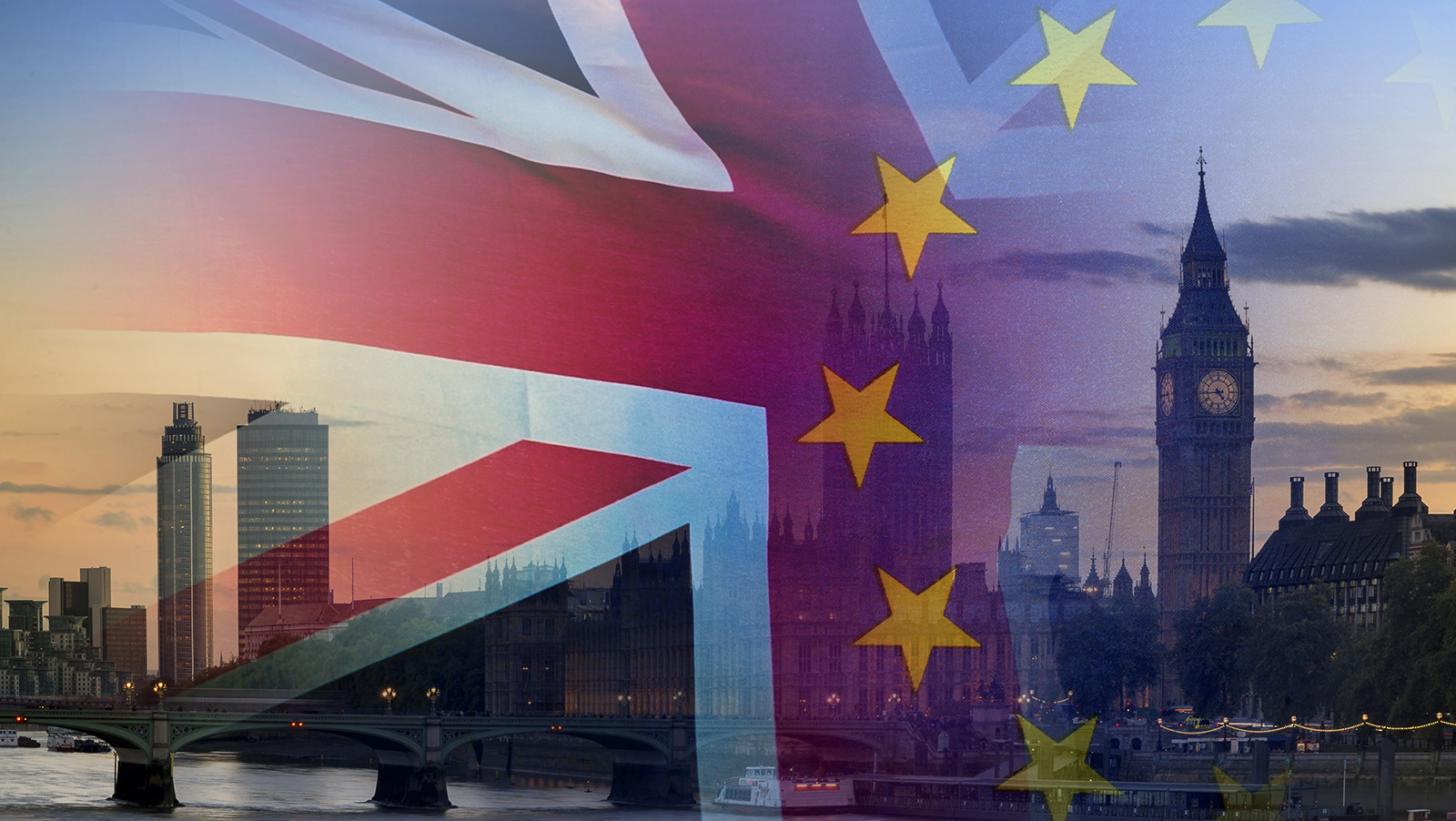 Economic historians are going to look back at 2019 as a watershed year, a turning point akin to a financial World War I. 1913-1914 were very bad years, and they changed the entire world for the next century until today. The Federal Reserve was founded in 1913, setting the stage for centralized credit manipulation in the United States and the first step along the road to pure fiat currencies. The constitutional amendment allowing an income tax was also introduced that year, setting the stage for the taxation typhoon the world has suffered ever since. World War I, financed by credit expansion, led to the manipulated boom of the 1920’s, which led to the Great Depression, which led to the horrors of World War II and so on.

I don’t think I’m the only who who feels like we are at the precipice of something big. Many of us can feel it in the nastiness of political rhetoric made worse by social media. It feels like everyone is drowning in debt and something’s gotta give. We are on the verge of global currency manipulation so extreme that interest rates are about to go deeply negative all over the Western world that will spur people to get rid of their paper currency as fast as they can. The trigger? It could be the no deal Brexit that now looks pretty certain, which I previously thought was impossible. There just doesn’t seem to be a logistically realistic way to stop it at this point.

Where does the gaming industry fit in to all this? I’ve said it before and I’ll say it again. Gaming is the industry on the frontiers of liberty in society. When liberty is under attack, gambling is among the first targets. It is so easy for politicians on all sides to use it as a scapegoat. When they’re under pressure, that’s just what they do. We are seeing it in Spain now, and Italy, with increasing ferocity. Advertising bans on gambling (except for government gambling operations) are on their way in Spain, and the only thing stopping it in Italy is the fact that the government is so unstable it can’t actually do anything. At least there’s that.

After Italy’s media regulator said that an ad ban was impossible and would actually exacerbate gambling harm (they’re right), Italy’s ham-handed government simply threatened to replace the regulator. It’s no coincidence that these crude moves are coming from countries with the most bloated governments with the largest debt loads and unemployment levels in the European Union. The more pressure they are under, the more the scapegoats will come under attack. When you can’t do your job well you look for something else to attack and divert attention from your sinking ship.

Until now I’ve been reluctant about guessing the particulars of the end game itself, but now I believe I see it starting to take shape. Here’s how I see it going down. Could I be wrong? Sure. We’ll see. For those who want to skip to the end, the end is to stay light in stocks, make sure you own some fixed allotment of precious metals, and keep a small speculative position in Bitcoin (BSV).

Here’s how I think it could happen. First, the U.K. leaves the EU without a deal. Brussels is so cocky now that they actually believe Britain will be worse off than the EU after this happens. They won’t be. The truth is, the EU is in a much weaker position than Britain, with all of its extremely indebted sovereigns weighing it down. EU banks are dying, getting choked by negative interest rates. In Denmark they have been negative for four years already. Nordic banks are scrambling to try to figure out how to survive without charging depositors, which they are about to do anyway out of necessity. Try making money on a loan when you have to pay people to loan them money. It’s not a good business model.

Even the biggest and most systemically important banks in the EU’s economic engine of Germany are dying. When the U.K. leaves without a deal, it’s very possible that the Too Big To Fail Deutsche Bank will need a Too Big To Stomach Bailout. That will freak out the whole continent and push the European Central Bank to slam negative rates into overdrive. The International Monetary Fund isn’t even being subtle about this at all, pretty much admitting this is the plan. They see no particular moral problem with the direct and wholesale theft straight out of people’s bank accounts.

Prior to the last financial crisis, the Euro area interbank rate was 5%. Now it’s a record low negative 0.42%.

The next crisis could bring that down all the way to -5% or even below. Of course, that will necessitate coordinated penalties on physical cash withdrawals of about 5% to stave off a run on deposits. People all across Europe will be stuck with a 5% annual fee on their deposits or worse, just to keep the banks functioning.

The result of that will be people buying anything they think retains value, just to reduce their cash balances. That is the perfect recipe for a crack up boom in the Eurozone. The ECB has been trying to stoke inflation for years. They’re going to get lots of it, and soon.

In the face of this, a newly independent United Kingdom will have two choices. Either they can go down the path of more debasement and manipulation, or Boris Johnson can set the stage right now and save the U.K. economy by saying the following to the EU and to U.K. industry generally:

We the people of the United Kingdom are leaving your institution without a deal. Regardless of any tariffs or trade restriction you may place against us as a result, we pledge not to raise any tariffs or extra regulations against any goods or services that come from what is left of your union. The U.K. is entirely open to free trade just as it was before. The ball is in your court now, and we pledge not to retaliate.

I do not expect Johnson to take this course unless he is forced to. He, or whoever succeeds him if he doesn’t survive politically, will quickly have to make the choice between further easing and matching the price inflation of the EU, or holding firm, stop the presses, let the pound rise and interest rates rise, and allowing malinvestments to clear. The latter will be painful and result in a lot of bankruptcies, but the former will be the death of the pound sterling itself.

As to which direction the U.K. chooses, the bellwether could very well be the large U.K. gambling stocks, just as the biggest casino stocks in the U.S. were the first to warn something was seriously wrong in 2007. MGM fell 50% in six months starting in October 2007. Las Vegas Sands followed along that same line. If British politicians start going all legislation-happy and raising taxes and instituting ever more restrictions on the gambling industry, it’s a bad sign the country is headed in the very wrong direction. Rather than dealing with what will be the economic challenge of a generation, they’ll be looking to pass the anger off on some poor zhlub. It won’t work anyway if they try.

It looks like October 31, 2019 could turn out to be October 2007. But Ground Zero this time will be bonds and currencies rather than primarily equities and real estate.

U.K. stocks will still probably suffer in the immediate aftermath of a no deal Brexit, but I don’t expect a total collapse. The FTSE 100 should perform relatively better than other indexes (not to say it won’t decline), and the U.K.-focused gaming industry should be less hurt than its Asian counterparts. The FTSE 100 today is not much higher than it was at the October 2007 top anyway. Bank of England money printing has actually been very tame compared to pretty much everyone else, the pound supply up only 17% since the beginning of the decade. U.K. gaming stocks are way off their highs in any case, so they won’t be falling from their peaks. 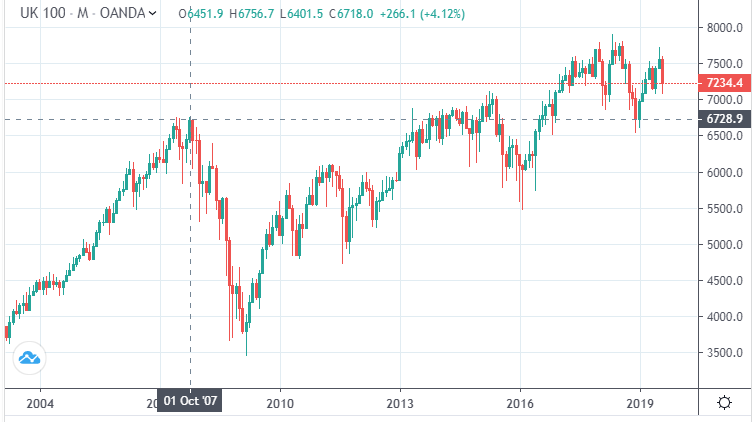 If the U.K. stays broadly on the side of free trade and deregulation, its market should recover. Watch what Downing Street does, and if they stay conservative and lean free market, accumulate U.K. stocks with strong balance sheets on heavy down days. William Hill’s dividend is too good to pass up and its stock is already depressed. 888 could also suffer in the aftermath but both companies will survive. 888 still has no debt and William Hill’s is manageable. Paddy Power Betfair, now called Flutter, should also make it through to the other side of this.

Positions in these stocks should still be relatively light though, because they’re going to get volatile through all this. The biggest position while we wait should be cash, but since currencies are the epicenter of the problem here, a sizeable portion of that cash position should be in precious metals before rates go deeply negative and everyone scrambles for something valuable to grab on to. Not many people who aren’t gold bugs have noticed this, but gold is already at record highs in pounds and rising. A much smaller speculative allocation can go into Bitcoin (BSV). I have no idea how BSV specifically will react to something like this, but it could jump to new records if people fleeing government paper think BSV will retain purchasing power.

The United States is on a bit of a different clock, and hopefully we’ll get into that next week.